According to a report in Daily Mail, Premier League giants Arsenal have put Colombian star James Rodriguez on their list of potential signings in this month’s window. The Gunners would only have to pay £3m to get the player on loan for the remainder of this season.

James is entering the last six months of his loan move at Bayern Munich from Real Madrid. And the German champions would let the player join the Londoners if they receive the money (h/t Daily Mail).

The 27-year-old was signed when Carlo Ancelotti was in Munich, but new manager Niko Kovac doesn’t fancy giving him the chance. With Mesut Ozil not able to get into the line-up and Arsenal lacking creativity, getting James on a short-term deal would be ideal for the club.

The German is now the first-choice keeper at Arsenal and will start every league game.

Despite his inconsistency, the German is one of the best centre-backs at the club. On his day, Mustafi plays very well.

The Greek has been a decent signing thus far and should start every game if the Gunners are to improve defensively.

The Frenchman needs to get back to his 100% after a long injury layoff. His experience and defensive sturdiness would be key in the upcoming months.

The pace of Bellerin on the flank is something that is better used when he is playing as a wing-back. The Spaniard then gets more license to move forward.

The Uruguayan is one of the better signings Arsenal have made in the last few years. He should start every league game to solidify the midfield.

The Swiss has had a decent season thus far but is always prone to mistakes in the dangerous areas. If he cuts out the mistakes from his game, he could be a fantastic midfield partner for Torreira.

The Bosnian is at his best when playing as a wing-back as it provides him with more freedom to move forward.

The Colombian can come in and play as a creative midfielder, finding pockets of space in between the lines and feeding key passes to the two strikers up front.

The Frenchman leads the line for the Gunners and is pretty good at it. If James arrives, the striker would be looking forward to linking up with him.

Read More: Arsenal signing this £36.5m Barcelona outcast would be an absolute steal – could change the team dynamics

In this system, Aubameyang can play as a second striker, placing himself on the left channel and then making runs into the box. The Gabonese international is one of the in-form strikers in the league. 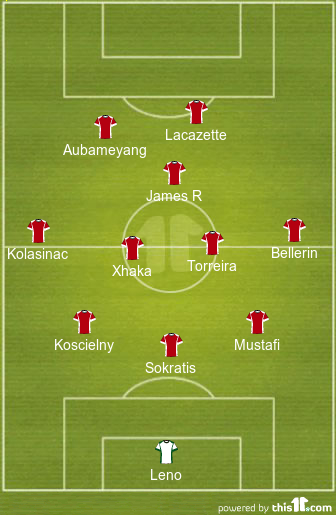