Arsenal FC is one of England’s biggest clubs. Even with an extremely large support condensed in North London, they have followers in most countries in the world.

Emery has changed the trend of transfers being conducted at the Emirates. Under Wenger in recent years, a lot of their deals were average at best. While the Alexis Sanchez transfer will prove as a prime example, the Gunners have brought in players like Mohamed Elneny and Andre Santos in recent years, which are questionable signings.

With the recent rumors suggesting that Arsenal could be interested in signing Ever Banega from Sevilla and Nicolas Pepe from Lille, let’s take a look at what the Arsenal line-up could potentially look like after the January window if they manage to sign their targets.

Having come in to replace the ageing Petr Cech, he has grabbed the starting position by the horns and made it his. It looks like he’s going to hold onto the position.

A top quality right-back, he has been one of the few consistent players for the Gunners over the past 2 seasons and is expected to continue down the wings all the while delivering some mean crosses.

Recently acquired from Borrusia Dortmund in Germany, he has been a solid defender for the Gunners so far and looks set to continue his fine form into the New Year.

The most experienced of all the Arsenal defenders, Koscielny has a crucial role to play for the Gunners in the second part of the season. Just back from injury, he needs to focus on keeping himself fit as well.

An attacking wing-back who is quick and powerful on the ball, Kolasinac is still working hard towards nailing down his spot for which Nacho Monreal is competing too.

The Mirror suggests that Emery is keen to bring the Sevilla man to north London, having already worked with him while at Sevilla. An excellent distributor of the ball, he could be the perfect midfield partner for Lucas Torreira. At £18m, he would be a fantastic buy.

The little Uruguayan has been a revelation since signing and is already a fan favourite at the Emirates. He will continue to play a vital in this talented looking Arsenal side.

Having signed as part of the deal that saw Alexis Sanchez go to Manchester United, he has unbelievable talent and potential to be a superstar for Arsenal in the seasons to come.

The German magician has been dropped by Emery for a few games this season. When he plays though, he makes the Arsenal side look like world-class.

The Manchester Evening News has linked Pepe with Arsenal. The £72m-rated has already notched up 12 goals this season, behind only to the French prodigy Kylian Mbappe. He could turn out to be a superstar on the left wing for Arsenal.

Read More: Enough is enough: Emery has to offload these 2 average Gunners stars to make room for quality signings

Currently the joint top-scorer in the Premier League, Aubameyang has set the scoring charts on fire so far this season. Still improving game after game, he would be the central striker for Arsenal, along with Alexandre Lacazette, who would be competing for a place in the playing XI. 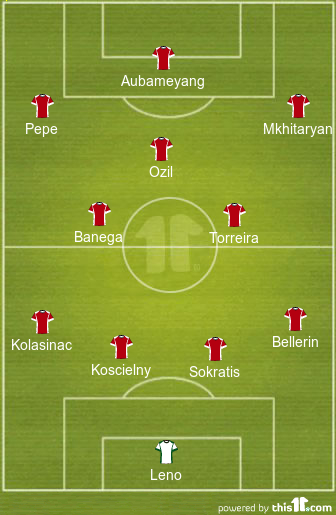