According to reports in the Manchester Evening News, Premier League defending champions Manchester City are preparing a club record bid in order to secure the services of Dutch midfielder Frenkie de Jong from Ajax.

The Eredivisie giants are holding out for a fee closer to £71m, which City are planning to pay. They have already broken the club record this summer by signing Riyad Mahrez for £60m from Leicester City. Getting a quality player like De Jong would be an icing on the cake for Man City as they have enormous quality in their team already.

The move does make sense from the Cityzens’ point of view, as Fernandinho isn’t getting any younger. He is 33 now and will be 34 by the time this season ends. Hence, signing a young defensive midfielder who is slowly getting at his peak is just the right move for the club.

Here’s how Pep Guardiola can line his team up next season with the potential inclusion of De Jong:

The Brazilian is probably the first-choice keeper at the club for the long-term. One of the finest in the business.

The athleticism and the adaptability of Walker are vital to Guardiola’s system, especially to how his full-backs come inside to help the midfield or go outside depending on the situation.

The Englishman is slowly getting there to be a regular first-choice centre-back. He has the qualities to do so.

Laporte’s transition at Manchester City has been fantastic. He is probably one of the best ball-playing centre-backs in the Premier League.

The attacking thrust provided by Mendy is key to how City attack because the Frenchman is versatile and can play the percentage game if required.

Fernandinho might not play every game next season at the age of 34. As a result, De Jong can play this role if the club signs the Dutchman sooner or later.

The Belgian’s quality on the ball is extraordinary and his work rate off the ball is commendable as well. He is one of the best attacking midfielders in Europe.

The creativity and the imagination of Silva are matched by none. He can run games on his own and break the deadlock with his trickery.

The German’s pace and vision to hug the touchline is something which makes him special. His rapid speed is a threatening prospect for any defence to face.

He will be 31 by the start of next season but given the fitness level he is showing this season, it will take some stopping. Furthermore, his scoring record doesn’t seem like stopping.

Read More: Why Man City completing a £40m deal for this rising PL star could be a shrewd move by Pep

The Portuguese can play a variety of roles from the right-wing position. He can stay wide and stretch the defence, or come inside to leave space for Walker on the outside. He can also play on the half space to become difficult for the defenders to mark. 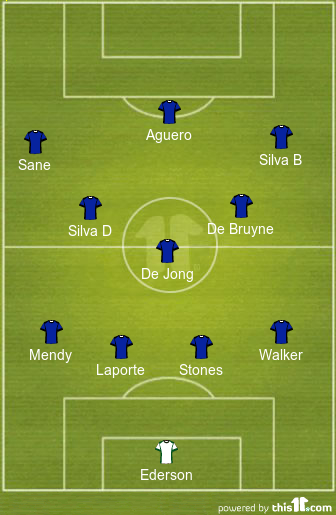