Aston Villa made two late loan signings to bolster their attack. They got Everton winger Yannick Bolasie on a season-long loan, which is a bonus for them as the Congo international is a quality player. (BBC)

Meanwhile, Tammy Abraham too joined Steve Bruce’s team on the deadline day, in a loan move from Chelsea. (Sky Sports)

Villa have also signed John McGrinn and Orjan Nyland from Hibernian and FC Ingolstadt respectively. So the team now looks in better shape, especially in the attacking department, with Jack Grealish in the team.

Here’s how Villa could line up with all the new signings in the XI, which makes up for an exciting team that looks capable of pushing for Premier League promotion this season.

He is been a bit susceptible so far but Nyland has the potential to be a top goalkeeper for Aston Villa in the near future.

The Manchester United loanee should do much better if he is to go back to Old Trafford and fight for a first-team spot.

Chester has been in and out of form. The experienced centre-back is expected to do better and lead this team from the back.

The Aussie has done well to adapt to this new role at centre-back. Bruce would want him to keep doing well, although the Sheffield United game was a collective failure.

The veteran always shows up whenever he plays, even though Neil Taylor is right behind him, waiting to grab that left-back spot.

The loan signing should do well if he intends to get back into Everton’s plans. For that to happen, he needs to fire for Aston Villa this season and stay injury-free.

The Icelander would be partnering the powerhouse McGinn in central midfield.

McGinn has been impressive thus far, having joined the club this summer. Bruce would want more of the same from him.

The Egyptian has been up and down in his performance level this term. The team needs more from him.

Villa will hope the playmaker gels with striker Abraham to create and score goals for the team.

Read More: 3 goals, 3 assists in 6 games – Aston Villa could bag a coup by landing this rising Championship star in January

The newly acquired Chelsea loanee would be hoping to prove his worth by having a fantastic season for Villa. 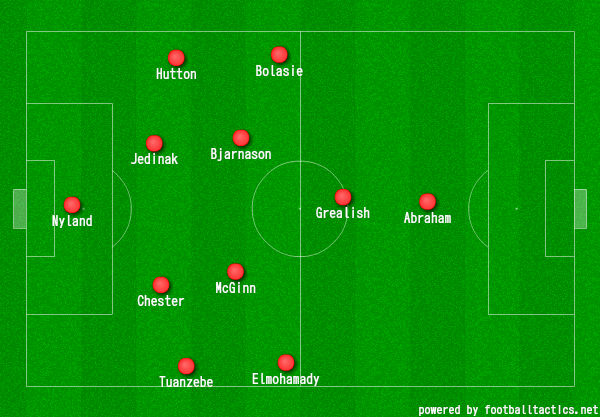