Swansea City welcome Fulham to the Liberty Stadium on Friday evening, hoping to bounce back to winning ways in the Championship.

The Swans were held to a 1-1 draw by Huddersfield Town on Tuesday, with Trevor Chalobah shown a straight red for the hosts. The point keeps Swansea City in the top-six and nine from leaders West Brom.

Fulham, meanwhile, defeated Derby County 3-0 on Tuesday and will head to South Wales in high spirits.

Mike van der Hoorn was forced off at half time following a wild tackle from Huddersfield’s Frazier Campbell. The defender looks likely to miss the game on Friday.

Joe Rodon missed the Huddersfield game due to a knock but could be back in the squad against Fulham.

On-loan from Newcastle, Woodman is Swansea’s first-choice keeper and will remain in goal for this game as well.

Roberts had a solid game in the 1-1 draw with Huddersfield and is likely to keep his place at right-back on Friday.

Cabonga replaced the injured Van der Hoorn at the break for his league debut and didn’t look out of place against Huddersfield. He was composed on the ball and did very well. Should start in central defence on Friday.

The Watford loanee has done well so far but will have to be at the top of his game to keep the Fulham attackers at bay.

Bidwell has performed well at left-back and should retain his place in Cooper’s starting XI.

Fulton scored his first goal of the campaign and did well overall against the Terriers. Expect him to keep his place for this game.

Grimes has been in and out of form. He has to bring consistency to his game if Swansea are to achieve a berth in the playoffs.

Ayew has made a good start to the season and will aim to get on the score sheet against Fulham.

With Celina failing to impose himself against Huddersfield, Cooper could hand Byers a start in the number 10 role on Friday.

Dhanda has been in and out under Cooper. He will be raring to make an impact as Swansea look to get back to winning ways in the Championship.

Borja Baston struggled to stamp his authority on Tuesday and could make way for the young Sam Surridge against the Cottagers. 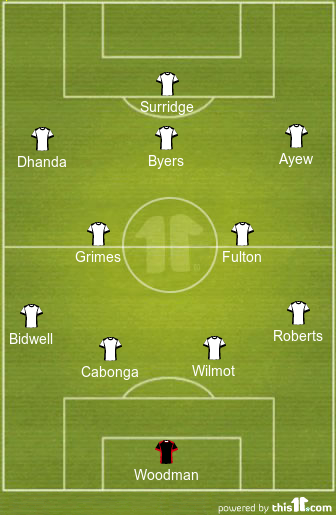