Les Blues didn’t put in the most convincing of performances in Group C and yet managed to top the table. France will be aiming to make a statement after narrowly missing out on the Euro Cup, losing 1-0 to the Portuguese. Eder broke French hearts when he scored a winner in extra time to send the Portuguese fans into raptures.

Didier Deschamps’ men opened their campaign with back-to-back wins against Australia and Peru. But the manager deployed a second string side their final game against Denmark, which proved to be a largely underwhelming match and the only one to end in a goalless draw in the group stage.

The French will be taking on Leo Messi and his Argentinian entourage, who haven’t really enjoyed the best of World Cups so far.

Lionel Messi will be going up against Barcelona teammates Samuel Umtiti and Ousmane Dembele but their relationship certainly won’t get in the way of their objective. France take on Argentina in the Kazan Arena on Saturday and it has all the signs of turning into one of the best games of the tournament so far.

Hugo Lloris, Paul Pogba and Kylian Mbappe were all dropped to the bench against Denmark but should return against the Albiceleste. 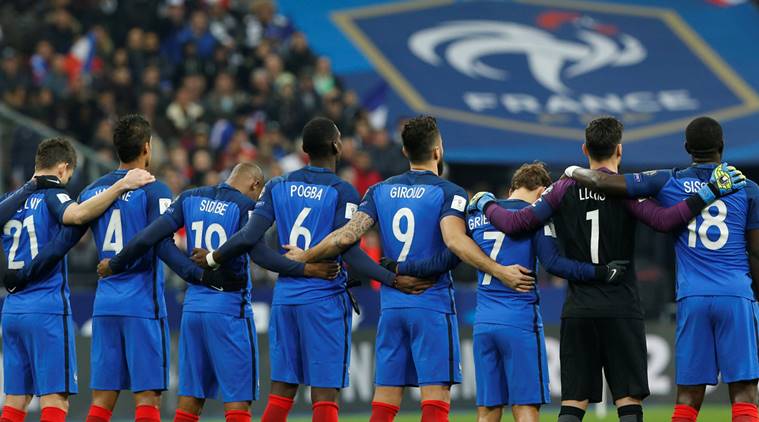 The French don’t have any fresh injury concerns except Samuel Umtiti, who is facing a race against time to start the game. Blaise Matuidi, Paul Pogba and Corentin Tolisso are one yellow card away from being suspended for the quarterfinals.

The Spurs No.1 was dropped to the bench last game and should return for the clash against Argentina. Lloris is the best goalkeeper the French team possesses and there’s no chance someone else would start over him unless he’s injured.

The 22-year-old started both of France’s opening games as Deschamps’ right-back and is expected to return to the line-up for this game. Pavard enjoyed an impressive campaign with VfB Stuttgart this past season and the youngster could be France’s next best big thing at right-back.

With Umtiti being a doubt for the game, Adil Rami should get to start against Messi and co. Surely, there’d be a lot of pressure on him.

Varane partnered Umititi in the first game and the duo looked pretty solid together. But Varane may have to start alongside the experienced Rami this time.

The Atletico Madrid defender played all three games for Les Bleus so far, putting in decent shifts every single time. He is expected to feature in the line-up once again on Saturday as the left-back has shown his ability to play consecutive games without any real fatigue.

The absence of Pogba was felt against Denmark and the Manchester United midfielder is expected to be back for the game against Argentina. With him in the middle of the park, France looked a formidable side. The Frenchman could wreak havoc after getting a well-deserved rest.

Is there any chance that Kante would be benched for this game? No way. Kante has been one of the most consistent box-to-box midfielders in Europe over the last two years. The Chelsea midfielder has the lungs of a stallion and there’s no stopping Kante when he’s on full throttle.

The Bayern Munich midfielder was dropped to the bench after playing the opening game against Australia. He brought a little more creativity and flair to the midfield. With Kante and Pogba in support, Tolisso will have the freedom to surge forward.

The Barcelona winger’s pace is unmatched. He caused all sorts of problems for the Australians in their opening game. He was a whisker away from scoring but unfortunately, failed to do so. With him on the left-wing, the Argentina defence will have to think twice before moving foward.

Griezmann scored the opening goal for France at the World Cup. He’s the biggest threat that Les Bleus possess and Deschamps will be ready to unleash him against an Argentinian defence that hasn’t looked so solid over the last two games. He is a deadly finisher in front of goal and there’s every chance of him getting on the scoresheet against the Albiceleste

You may also like: Why Man United shouldn’t think twice about swapping Pogba for world-class midfield general

Mbappe got his goal in the second game against Peru, making him France’s youngest ever goalscorer in the FIFA World Cup. He has been in scintillating form throughout the year. His pace and dribbling ability will certainly threaten the Argentinian defence.