Nottingham Forest have had a decent start to this Championship season, winning one and drawing two games in the three they played. Under Aitor Karanka, they look more cohesive and determined to grind out a result if need be.

Karanka won’t use his fringe players of academy products in the league games, however, he might test them in this League Cup tie versus Bury. It is now up to those fringe players to impress the manager.

There is a large possibility that the likes of Costel Pantilimon, Jack Colback, Joao Carvalho, etc. get a rest for this game. We might witness an influx of fringe players and also youngsters. Jordan Smith, Matty Cash and Joe Worrall will be looking to catch the eye of the manager.

The academy graduate will be eager to perform well and deputise for Pantilimon as well as he could.

Darikwa has started all of the games so far, and should keep his place at right-back.

Dawson began the season against Bristol City but was dropped against West Brom and Reading. The senior statesman should start on Tuesday.

The young academy product could be excited to play alongside one of the experienced players at the club.

Robinson hasn’t yet started a game, with Ben Osborn taking over the left-back role. Jack is expected to get his chance in this League cup tie.

Watson will add experience and know-how to the central areas of the pitch. He will be the one to sit deep and protect the back-line.

If Bridcutt is to displace Jack Colback from the team, he has to perform well in this game and make sure the manager is impressed.

Having played the league games as a left-back, Osborn will get his opportunity to operate further forward in the left-wing position.

Scored the winner against Reading after coming off the bench. The 30-year-old should now get his chance from the start.

The academy player would love to play and enhance his reputation in front of his first-team manager.

Murphy started the first game and scored but didn’t feature in the next two games. The 35-year-old is nearing the end of his career and might get this game to exhibit what he is still capable of. 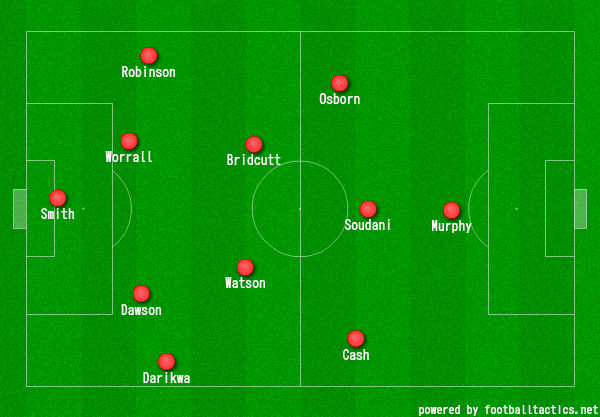