Wolverhampton Wanderers commenced their Premier League campaign with a 2-2 draw at home to Everton. Ruben Neves was a star by scoring a fantastic free-kick and providing an assist for the equaliser late on.

Manager Nuno Espirito Santo would have been pleased with the way his team performed in their first game back at top-flight football. However, the Portuguese will expect his front-line to deliver against a Leicester City team who gave a good account of themselves on the opening night at Old Trafford.

New signing Adama Traore is a doubt for Wolves due to an injury concern. Apart from that, Nuno has a full strength squad to pick his team from. He might give Leo Bonatini a starting role after the Brazilian impressed coming off the bench to replace Helder Costa, who was slightly off colour.

The experience of Patricio will be key for Wolves this season and he looked calm on the ball. Didn’t have any chance of saving the two goals against Everton.

Bennett played a good game while passing out from the back. He needs to be a bit more solid in defending though.

Coady is the governor-general of this team, playing the sweeper role. The captain will lead his team from the front as always.

The defender was solid when asked to defend but was quite lazy in possession. He almost gifted the ball to Everton players last time around and needs to be alert this time around.

Doherty was an attacking outlet from the right-hand side but will need to improve his final ball to harness more impact.

The experienced Moutinho was diligent in possession and covered the space while defending. He will be a key figure in the midfield for Wolves this season.

The star man from last game and the ace card of the team, Neves is expected to reach the heights this season, which will surprise many. We shouldn’t rule out another long-range goal from him this weekend.

Jonny should start regularly at left wing-back after the departure of Barry Douglas to Leeds United.

Jota was lively throughout the game but needs to work on his final pass. The Portuguese is talented enough to put that right.

Scored a late equaliser on his debut to really boost his confidence for the upcoming games. He is a good target man for Wolves.

Read More: Watch out Premier League – This £15m Wolves sensation will take the English top-flight by storm this season

The Brazilian impressed upon his arrival from the bench. He certainly deserves a chance to start at right-wing with Helder Costa looking off-radar. 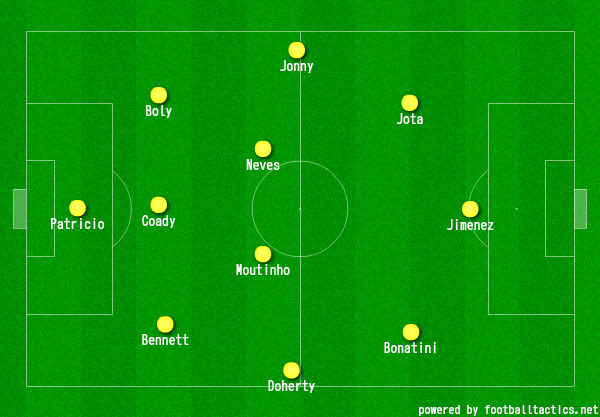