It was another enthralling weekend of Premier League football with a number of teams facing upsets and a couple of others maintaining their strong form. The likes of Liverpool, Manchester City, Watford, Chelsea, Tottenham Hotspur and Bournemouth all continued their strong start with consecutive wins.

But giants like Manchester United and Arsenal faced defeats and will be aiming to make quick amends in the next game. As the second game week concluded with Liverpool’s win over Crystal Palace, we take a look at the best performers over the weekend.

Premier League team of the week

The Philippines international made two penalty saves in two games for Cardiff City despite the team enduring an underwhelming start. He is our goalkeeper of the week.

Mendy continued his strong form, marauding down the left flank and causing all sorts of problems for the opposition. He’s now got 3 assists in just 2 games and is our left-back of the week.

The Liverpool centre-back won the most number of tackles and clearances for the team against Crystal Palace, continuing his dominance at the back.

The Cherries have made a magnificent start to their Premier League campaign and Cook has played a vital role at the back so far. The centre-back also scored the winning goal against the Hammers this weekend and assisted one as well.

Pereira has been impressive since making the move to the King Power Stadium. He has been defensively sound and provided an assist in the first game.

The Spaniard returned to the line-up and immediately picked up his first goal of the season. Silva proved to be an able creator in the absence of Kevin De Bruyne.

The Leicester City attacking midfielder capped off an impressive performance by scoring his first goal for the club. Everything that Leicester do seems to be happening via the former Norwich man.

The former Arsenal winger scored one goal and assisted another one in Everton’s 2-1 win against Southampton. Walcott’s pace down the right flank caused all sorts of problems for the Saints.

With all the cameras on Mo Salah, it’s Sadio Mane who is proving to be a menace for the Reds so far. The Senegalese international now has 2 goals in 2 games this season.

The veteran striker handed Eric Bailly one of the worst afternoons in his career, completely making a mockery of the player. He scored a fine goal as well with a deft finish to beat De Gea from close range.

There’s no denying Sergio Aguero has been the most clinical striker in the Premier League over the years. He’s absolutely scintillating and ruthless in front of goal. The Argentinian scored a hat-trick and supplied an assist in the 6-1 demolition of Huddersfield Town. 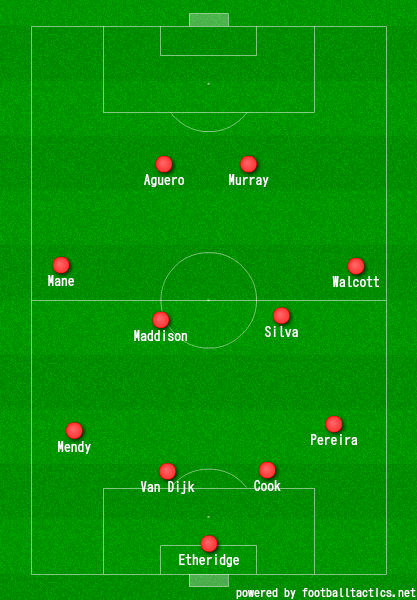 Premier League team of the Week