Predicted Middlesbrough line-up to face QPR in the Championship

Middlesbrough are winless in three games at the moment and really need to step up their performances if the club are to get promoted at the end of the season. After making a fantastic start under Tony Pulis, Boro have slightly fallen off the pace.

But they are still very much in contention to make playoffs as they travel to Loftus Road to face Queens Park Rangers this weekend. The Rangers are not in good form as well and Pulis will definitely want the win.

Dael Fry, Rudy Gestede and Sam McQueen are the only ones out for Middlesbrough at the moment. Muhamed Besic will miss out after picking up a red card in the last game.

Randolph has done well in recent weeks but Boro have failed to stop the goals. He will keep his place between the sticks.

Shotton has raided well down the flank and will continue to do so against the Rangers.

Ayala has looked good after returning to the squad in recent weeks. He will start in central defence.

Flint will continue to partner Ayala at the back. The duo has forged a strong bond between each another.

Friend needs to be more aggressive defensively. He has looked good going forward though.

McNair will come into the side instead of the suspended Besic. The Manchester United loanee will aim to impress and take his chance.

Clayton will continue in the middle of park and dictate the play. He has done well defensively.

Needs to provide more spark in the final third. Howson has not been clinical enough.

Downing’s deliveries will cause all sorts of problems for the Rangers.

Needs to get back on the scoresheet and raise his confidence. He has been impressive.

Assombalonga should come in place of Ashley Fletcher for this game and raid the left flank. 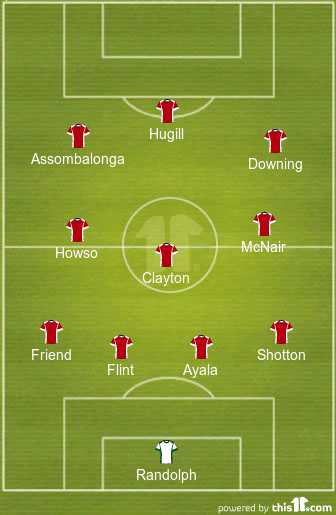