Newcastle United will be hoping to get something out of their next league game against defending champions Manchester City at St. James’ Park tomorrow night. The Magpies won their previous league game against Cardiff but lost their FA Cup tie to Watford on Saturday. They would be aiming to get a point if they can, against this ruthless City team.

On the other hand, Pep Guardiola’s men have been nothing short of irresistible this year. They just smashed Burnley 5-0 in the FA Cup fourth round and look favourites to do the same to Newcastle tomorrow. However, no game in the Premier League is easy, especially when it is away from home. Hence, expect a fight from the Magpies throughout the game.

Ki Sung-Yeung is back from his national duty but with an injury. He is expected to be out for a couple of weeks. Paul Dummett is suffering from a thigh injury and is out. Jonjo Shelvey is also suffering from the same injury as the Welshman and is a doubt for this game. Mohamed Diame is very close to returning to the line-up having trained a bit in the last week.

He was rested for the cup game and is expected to be back for the league game tomorrow.

The American was on the bench but didn’t feature against Watford. He should be fresh enough to start tomorrow.

He was one of their best players against Cardiff and should start this game.

The captain will have to lead his team and make them defensively secure at the back against one of the best teams in the world.

He is now back fully fit and played a couple of league games as well. Newcastle would be delighted that the defender is doing well upon his return from injury.

With Newcastle short on options at left-back/left wing-back, we have seen Ritchie filling in there. He should do the same tomorrow.

He has done well on the left-hand side of the midfield, providing support to Rondon up top. Expect him to start.

The ex-Arsenal man has been starting in the last few weeks, especially due to the injury problems to other players. He is expected to do the same tomorrow.

Diame should be fit to start this game, which would come as good news to the Newcastle fans.

The Spaniard has scored some vital goals and always provides good support from the right-hand side. He is almost sure to start tomorrow.

The Venezuelan didn’t start against Watford and should be fresh enough to give problems to the City defence. 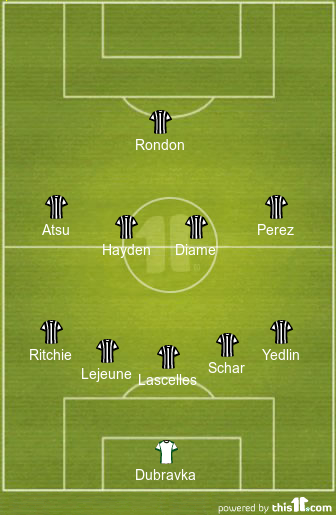