Newcastle United welcome Leicester City at the St. James’ Park in the second round of the Carabao Cup on Wednesday.

The Magpies picked up a shock 1-0 victory away from home over Tottenham in the Premier League on Sunday. They were required to put in a huge defensive shift to ensure that Newcastle got the win, and their commitment was on display right from the first whistle.

Newcastle United will be up for the challenge against Leicester, who head into Wednesday’s game off the back of a 2-1 Premier League success over Sheffield United.

Dubravka is Newcastle’s no.1 and should retain his place between the sticks against Leicester City.

Emil Krafth started the game against Tottenham, so Bruce could freshen up things in defence by handing Manquillo a start at right wing-back.

Schar has been solid at the back for the Magpies and deserves to keep his place in the team.

Fernandes replaced Lascelles in the last eight minutes of the game against Spurs. However, he could be handed a start on Wednesday.

A diligent and disciplined performer, Dummett should retain his place in the starting XI.

Matt Ritchie has done a commendable job in a makeshift left wing-back role. However, after a tireless performance against Spurs, Bruce could decide to leave him out of the starting XI in place of Jetro Willems.

A creative player, Almiron’s pace and flair could cause a lot of problems to the Leicester backline.

Hayden has started the season well for Newcastle and deserves to keep his place in Bruce’s XI against the Foxes.

Against a dangerous Leicester side, Bruce would want someone experienced to dictate the game and retain possession in midfield. That could see Shelvey start ahead of Longstaff.

Atsu created Joelinton’s winner at Tottenham and is a certainty to start against Leicester on Wednesday.

Joelinton was a real handful for the Spurs defenders on Sunday. His first goal for the club should have given him a lot of confidence and he’ll be raring to make a mark in the Carabao Cup game. 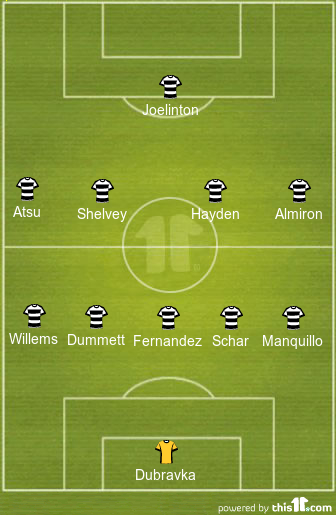