Hull City would be aiming to continue the positive momentum they gained last week by beating West Brom. They now face a tough Birmingham City team away from home knowing that a win could lift them out of the bottom three in the table.

Nigel Adkins’ men got a valuable 1-0 win against the Baggies last time out, and they will be looking for another positive result in Birmingham. The Tigers are still in the bottom three but now have the same amount of points as Preston, who are just above the drop zone due to better goal difference. Hence, it is clear that the race for promotion and getting clear of relegation is very hot in the Championship.

Hull City could even challenge for a mid-table finish if they start to pick up results in the next few games to build momentum.

Evandro and Jon Toral are still a few weeks off from any first-team action. James Weir and Angus MacDonald are getting ever so close to joining the first-team training sessions.

The experienced Marshall has been terrific for the Tigers in goal. A secured presence at the last line.

Played his best game for the club last week at right back against West Brom. Expect him to start there this weekend as well.

The loanee from Aston Villa continues to lead the Tigers’ back line and perform like a real commanding centre-back.

Another commanding player at the back and his partnership with Elphick is proving great for the team.

He did little wrong against the Baggies last week in an impressive defensive display. Expect the American to keep his place at left-back.

The skipper rolled up his sleeves and performed for the team when it was desperately needed against West Brom. Adkins would be hoping for more from the player.

Bowen has been one of the best attacking threats Hull have in their team. He continues to impress week in week out. Birmingham defenders need to be careful.

The Pole came into the side late this campaign and showed what he is capable of. With Grosicki on the pitch, the Tigers can hope for magical game-changing moments at any time.

On the overall balance of play, Campbell seems a better fit to lead the line rather than Chris Martin. 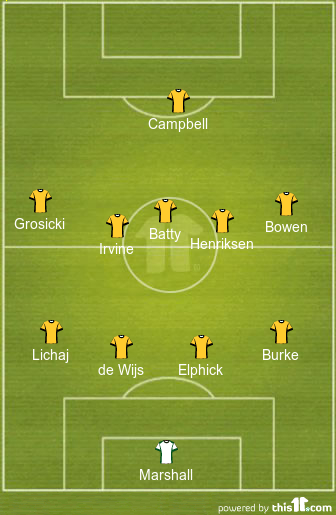