Southampton shared the spoils with Newcastle United last weekend but the Saints might not be so fortunate when they come up against league leaders Manchester City in this weekend’s clash. Mark Hughes’ men are lingering just above the relegation zone and are in dire need of points.

Guardiola’s Manchester City, on the other hand, are yet to concede in 6 games and are unbeaten as well. The Saints will definitely need to turn up or it could end in a disastrous fashion for the South Coast club.

Charlie Austin and Pierre-Emile Hojbjerg are both out and will be unavailable for this game. Apart from that, Hughes has no major injury concerns in the squad. The Saints have also received a week’s rest after their clash against Leicester City was postponed for a later date.

McCarthy will keep his place in goal despite Southampton’s poor form. He has been impressive though.

Soares has failed to make much of an impact over the last few weeks and will need to step up against the Champions.

Stephens should continue in central defence after showing signs of consistency in his displays.

Hoedt could partner Stephens at the back since they have looked like the most stable backline partnership for the Saints.

Bertrand will surely pose threats down the left flank with his surges up and down.

Redmond needs to show more efficiency and awareness in the final third.

Romeu will definitely have his work cut out for him coming up against a fluid and cohesive Manchester City attack.

Lemina has done well at times but the midfielder definitely isn’t doing enough to keep his team up.

The new signing hasn’t settled completely into the league and needs more time. However, he could find himself in the starting XI.

Ings is their top scorer in the league this season and he should definitely start this game.

Read more: Southampton’s goal-scoring woes would end if they sign this 5ft 11in Ligue 1 hitman in January

With Austin’s presence doubtful, Long must take his place up front and partner Ings. 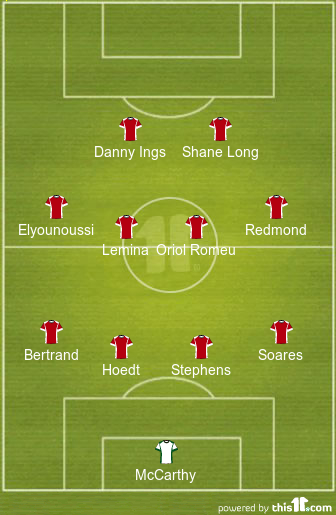