After a run of bad results before the international break, Burnley will be aiming to make a positive start to the final run-in of the season. They are up against an in-form Wolves team this weekend.

Sean Dyche’s men were in good spirits until the last week of February. But losing four consecutive games has pulled them back into the relegation fight big time.

The Clarets will be up against a Wolves side who are seventh in the table and defeated Manchester United in the FA Cup quarterfinals before the break. Hence, it won’t be an easy game for the home side.

Aaron Lennon has been suffering from a knee injury and is expected to be back in training next week. Johann Berg Gudmundsson suffered a muscular injury while playing for Iceland and could be out for this game. Steven Defour is a long-term absentee and doesn’t have a return date.

The experienced Heaton has been starting ahead of Joe Hart and Nick Pope for a while now. Expect that to be the case this weekend.

Bardsley has been in and out of form at right-back, hence, he must become consistent or risk losing his place.

He is the first-choice centre-back and is expected to start alongside Ben Mee.

Mee will be aiming to start keeping clean sheets and help his team win some points and get out of this relegation muddle.

He has been doing well at left-back and should start against Wolves this weekend.

With Gudmundsson a doubt for this game, Brady is expected to get a start on the right wing.

He would be aiming to keep the midfield together and work hard to supply the chances to the front men.

Cork is very similar to Westwood in terms of what the duo contributes to the team. Hence, they work well as a combination.

The youngster has been doing well on the left wing and would be looking to trouble the Wolves defence this weekend.

Barnes is good at holding the ball up and linking up with Chris Wood up front. He will have to be at his best against a sturdy Wolves back-line.

The New Zealander links up well with Barnes and would need to do so if Burnley are to score and win against Wolves. 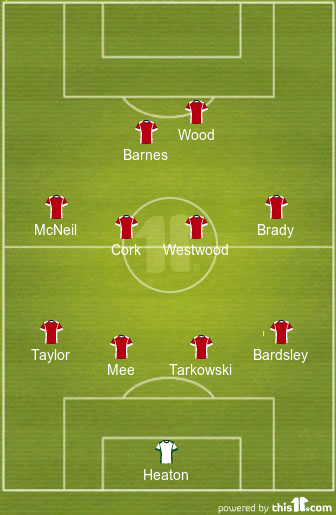