An all-but-safe Burnley would be aiming to keep their winning form going when they face Chelsea at Stamford Bridge. Sean Dyche’s men have won their previous three league games and as a result of that run, they are currently 14th in the table, eight points adrift of 18th-placed Cardiff City.

This Monday night, the Clarets play a Chelsea side who have been in decent form of late (barring last week’s defeat at Liverpool). Maurizio Sarri’s men, being at home, should be favourites for this game.

Hence, Burnley have to play out of their skins and defend well to get something from their London trip.

Aaron Lennon is recovering from his knee injury and will only be available from the start of next month. Peter Crouch is also a few days short of being considered for selection.

Phil Bardsley missed the last two games due to a thigh injury. He is touch and go for this game. Steven Defour won’t be able to make it for the remaining games of this season.

He has been Burnley’s first-choice keeper in the past few months. He is expected to be in goal on Monday.

Bardsley is a doubt for this game, hence, Lowton should continue to deputise at right-back.

Tarkowski and Mee is a centre-back partnership that starts almost every league game. The former is certain to start on Monday.

The experienced Mee would be aiming to keep the Chelsea attackers at arm’s length on Monday.

He is their first-choice left-back and is expected to start on Monday.

Even though Dyche has other options, he chooses Hendrick as he is defensively solid. Burnley have to be solid against Chelsea, hence, Hendrick should start ahead of Gudmundsson or Brady.

Westwood has had a decent season in midfield and should continue to keep his place in the team.

His ability to be positionally good and the desire to join the attacks on the counter would be key against Chelsea.

The youngster has added a breath of fresh air to this Burnley team. He can take people on and create chances for the two strikers. It would be vital for the team to find him on the counter-attacks.

Barnes is one of the best in the league when it comes to winning fouls and holding the ball up. He would have to be on top of his game on Monday.

The New Zealander’s recent form has been decent in front of goal. His aerial prowess from set-pieces can cause trouble to the home side. 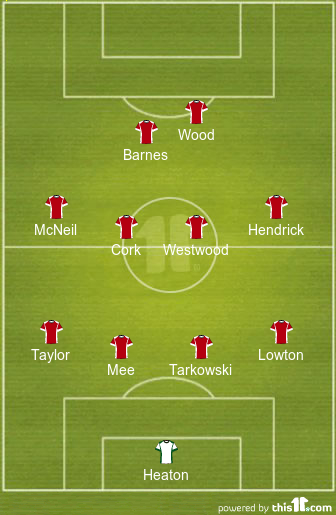