Predicted Bournemouth line-up to face Liverpool in the Premier League

Bournemouth have had an extreme week which saw an almost unbelievable 4-0 victory over 4th-placed Chelsea followed up disappointingly by a 2-0 drubbing at the hands of a struggling Cardiff City.

The Bluebirds were comfortable in that fixture, which could instigate Eddie Howe to motivate his players over the course of training this week. This game will be crucial as he will be looking for a reaction and what better place for a reaction than at the home of the league leaders.

Arguably their two best players from the current campaign, both David Brooks and Callum Wilson have been ruled out through injury and are expected to be back for the game against Wolves on the 23rd of this month.

Simon Francis and Lewis Cook have both been ruled out of contention while English full-back Nathaniel Clyne is unavailable for selection as he cannot play against his parent club.

The number one at the Vitality stadium ahead of error-prone Begovic. He is expected to keep his place for this trip to Anfield.

With Simon Francis injured and Clyne ineligible for selection, expect the youngster to switch to his usual right-back role.

The 27-year-old has been solid for the Cherries this season and will keep his place for this important game against Liverpool.

The man who was signed from Chelsea, he has impressed with his performances in the red and black jersey.

He could be forced to come in and play at left-back in the absence of Adam Smith who could be utilised on the opposite flank by Eddie Howe.

Another forced change, the injury to David Brooks will allow Stanislas another game in the starting XI after he played in the win against Chelsea.

One of Bournemouth’s midfield conductors, Gosling is responsible for keeping the ball moving with his short passing and good positioning.

The second half of the Cherries’ core, Surman and Gosling have formed quite a partnership and complement each other wonderfully.

Another breakout star from this season alongside Brooks, Fraser has been exceptional for the Cherries as he is a constant bundle of energy.

He showed his capabilities as the target man in the win against Chelsea as his pace and strength was too much for the Blues’ defence.

Read More: Bournemouth would be very shrewd to snap up this French free agent as Howe eyes top-10 finish

Brought in for a hefty price, the former Liverpool starlet is yet to show the Cherries fans what he’s actually capable of. 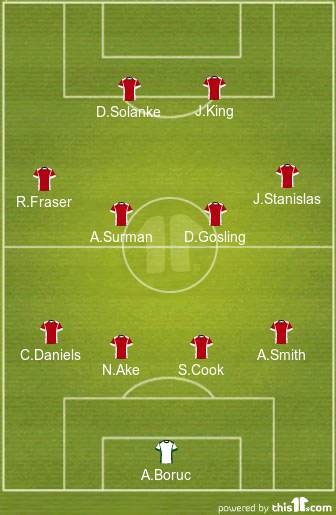