We are embarking on the final run-in of this league season, with a handful of games to go and certain ambitions on the horizon for many teams.

In terms of that, both Leicester and Bournemouth will be aiming to finish as high as possible. Currently, the Foxes are 10th in the table, while the Cherries are just two positions behind.

Eddie Howe’s men were denied three points against Newcastle in the final moments of the game a fortnight ago. They will now be looking to complete the job this time against Leicester at the King Power Stadium on Saturday.

Steve Cook has a groin problem, which will keep him out of action until the last week of April. Adam Smith has a hamstring issue and is touch and go for this game. Dan Gosling is recovering slowly but there’s no update whether he will be fit for this weekend.

Andrew Surman is probably out for the rest of this season, while Junior Stanislas may not be fit for the upcoming game. Lewis Cook and Simon Francis are long-term absentees.

The veteran goalkeeper has got the nod ahead of Asmir Begovic in the last month or so. Expect that to be the case this Saturday.

The loanee from Liverpool has been starting at right-back on a regular basis now. He should do the same against Leicester.

With injuries to other senior centre-backs, new signing Mepham is expected to get the nod alongside Nathan Ake.

The Dutchman has been the first-choice centre-back for some time now and is expected to start on Saturday.

The experience of Daniels would be required against the pace of the Leicester wingers in the wide areas.

The former Liverpool winger hasn’t really fired in Bournemouth colours so far. But with injuries galore, he has a chance to make a name for himself.

With a plethora of injuries in central midfield, we could see Brooks playing here again.

He is the only fit senior centre-midfielder in the team and is almost certain to start against Leicester.

The Scotsman’s pace and direct running with the ball would cause trouble to the Leicester defence. He missed the first Scotland game as a precaution and is fit to start this game.

Bournemouth’s star striker would be looking to add to his tally of 11 league goals for the season when he takes the field on Saturday.

He scored a brace against Newcastle a fortnight ago and would be aiming to hurt the Leicester defence in a similar fashion. 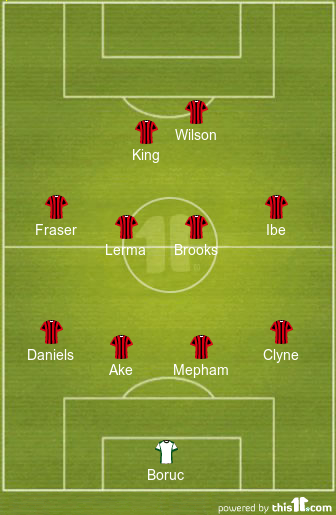