Predicted Bournemouth line-up to face Huddersfield in the Premier League

Bournemouth will be aiming to bounce back to winning ways when they host Huddersfield Town at the Vitality Stadium on Tuesday.

The Cherries had enjoyed their best-ever start to a Premier League season, but they have been beaten in each of their last four fixtures. Eddie Howe’s men will need to regroup and bag all three points against Huddersfield.

Huddersfield Town, meanwhile, remain very close to the bottom three despite their recent upturn in fortunes.

Jefferson Lerma returns after a one-game suspension, against Manchester City. Adam Smith won’t return until early 2019, while Dan Gosling is currently sidelined with a knee injury.

Begovic has been solid between the sticks for the Cherries. He should start against Huddersfield.

Francis has made the right-back position his own and should retain his place in the team on Tuesday.

Cook has performed very well this season, forging a brilliant partnership at the back with Ake.

Ake can initiate attacks from the back due to his ball-playing abilities. He would look to keep the visitors at bay on Tuesday.

Daniels may lack the explosive pace needed in a full-back but he makes it up with his positional awareness and game-reading skills.

Lerma would walk straight back into the starting XI after serving a one-game ban. A feisty character, the Colombian never hesitates to stick his leg to stop an opponent from advancing.

Cook is Lerma’s perfect midfield partner as the former Leeds prospect brings creativity to the floor. He is a gifted player who’ll only get better with age.

Brooks has been Bournemouth’s signing of the summer. The young gun is a creative player who can split open the Huddersfield defence with one clever pass.

Fraser’s pace and directness could cause all sorts of problems to Huddersfield’s shaky defence on Tuesday.

King will look to stretch the Huddersfield rearguard and make space for his strike partner Wilson to exploit.

Wilson has been in red-hot goalscoring form this season. He is a sure starter for Bournemouth. 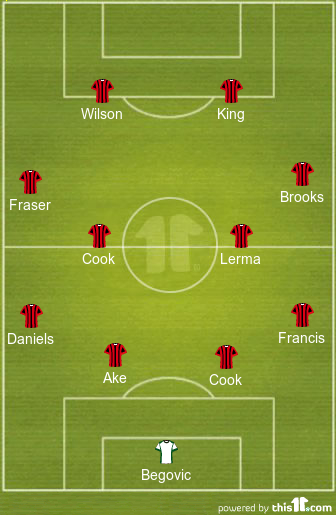