Hull City have performed pretty decently so far this season but haven’t been able to get a win. They lost at home to Aston Villa to start with and then drew at Sheffield Wednesday to pick up their first point last weekend. Manager Nigel Adkins would want more from his players in this league cup tie versus Sheffield United.

However, given the fact that Tigers will have an eye for this weekend’s league game against Blackburn Rovers, we may see a changed eleven. Adkins might start some of his bench players to see what they are like in his system.

Manuel Milinkovic isn’t fit enough to start a game yet. Meanwhile, we may see alterations in the regular line-up, with Reece Burke, David Marshall, Evandro and Fraizer Campbell getting a rest.

Long might get his chance to shine in goal, with Marshall expected to be on the bench.

The Tigers are short of quality right-back options, so Lichaj may well have to continue playing in that position.

With Reece Burke in line to get a game off, MacDonald should start in that central defence, partnering Jordy de Wijs.

He has been decent so far and the 23-year-old will get more games to prove his worth at the club.

Kingsley needs to perform much better in terms of his all-around full-back play. He should get his chance again to impress the manager.

The 20-year-old has done pretty well so far, without really showing any flamboyance. He keeps it simple in the midfield, which is what is required of him.

The tall Aussie is expected to get his chance and it will be upto him to exhibit his talent.

Bowen will keep his place at right-wing and deliver the goods.

The youngster has impressed so far, and he will be keen to continue playing well.

Toral couls start as the support striker in the absence of Evandro. The Spaniard has a high potential to fulfill.

Read More: Why Hull City could bag a coup by signing this Premier League veteran with over 272 caps

For the first two league games, Fraizer Campbell got the nod ahead of Dicko. This might be the game where the roles might be reversed. 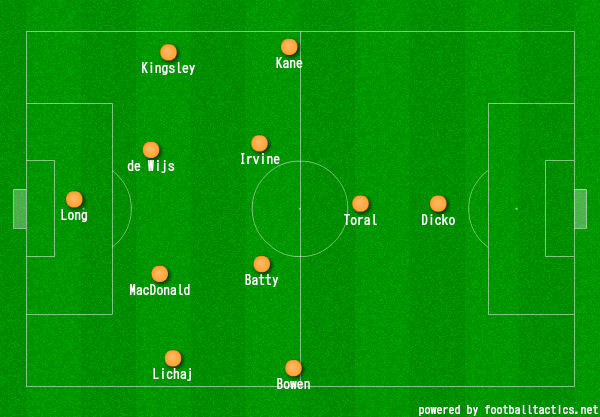