Predicted Hull City line-up to face QPR in the Championship

After holding league leaders Norwich City to a 0-0 draw in mid-week, Hull City will be looking to get back to winning ways when they face Queens Park Rangers at Loftus Road Stadium on Saturday. Nigel Adkins’ men were impressive against the Canaries and would be seeking to repeat that performance against the R’s.

However, QPR have been in decent form in the past month or so, as a result, they are now ninth in the table, just three points behind the playoff spots. Hence, it won’t be easy for the Tigers away from home.

Nouha Dicko is closing in on a first-team return and it will be touch and go for the weekend. Stephen Kingsley is also close but may not be considered for Saturday. Angus Macdonald is a long-term absentee, while Evandro is also closing on a return.

His presence in goal is so vital to the Tigers. The saves from Marshall always make a difference.

Made a come back against Norwich and was determined to do well. He should continue at right-back.

The loanee from Aston Villa continues to perform well for the Tigers. His presence at the back is immense for the team.

Replaced Jordy de Wijs in the team and switched from right-back to centre-back. Fair to say, the youngster did very well. Expect the same formation on Saturday.

The American continues to work hard for the team and make forward runs to support the attacks. He epitomises the team’s work rate.

He impressed against Norwich and should keep his place in the team even though Dan Batty will be available for Saturday.

The skipper led the team with a brilliant performance against the Canaries. More of the same is expected come Saturday.

He is probably the one who carries the most threat in the attacking areas for the Tigers along with Kamil Grosicki. QPR defenders should be watchful.

He wasn’t at his best against Norwich but still carries the threat. Ever since the Pole began starting games, he has added a different dimension to the Hull attack.

The Australian is not an orthodox number 10 but he works hard and tries to create chances for the team. Links up the midfield and the attack.

Campbell is back available for this game after being suspended for the midweek game. Should start. 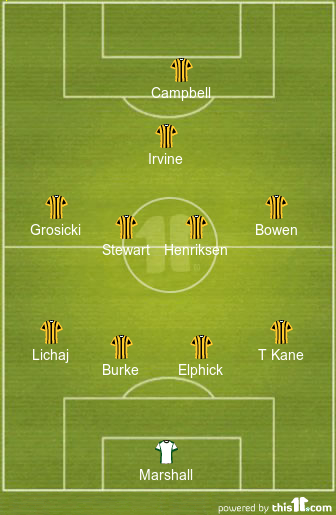