Predicted Hull City line-up to face Millwall in the Championship

Hull City will be aiming to keep their winning momentum going when they face Millwall away at the Den in a vital Championship clash this weekend. The Tigers were impressive in a 3-2 away win against QPR last week, leading them up to 19th in the table, two points clear of the danger.

Nigel Adkins’ men are up against a Millwall team who haven’t tasted a win in their last five games. Hence, Hull should be chancing their arms to get something out of this game. However, it won’t be easy.

Eric Lichaj and Reece Burke went off during the game against QPR, and are major doubts for this game. Stephen Kingsley, Nouha Dicko, Jon Toral and James Weir are close to returning. Evandro is out for a while. Angus MacDonald is out until the end of February.

The goalkeeper’s saves are always so important to the team. He is one of the best players in the team.

He has been good ever since he was moved at right-back. Hence, he should continue playing that role this weekend.

The loanee from Aston Villa is irreplaceable at the moment. His performances at the back have been influential, to say the least.

With Burke a major doubt for this game, we may well see out of form de Wijs in action.

He played that role in the second half against QPR when Lichaj was taken off. He probably has to do that again this weekend.

He has been a steady figure in central midfield in the past few weeks, something which the team needed to be stable.

The captain scored his first goal of the season last week and that will give him confidence going into this game.

The Australian has taken the number 10 role with aplomb apart from the fact that he missed a couple of gilt-edged opportunities against QPR.

His performances have been phenomenal this season. One of the few ever-present dangers in the Hull team.

Ever since he started playing games on a regular basis, the Pole has done well to harness an impact and deliver for the team.

He works hard regardless of whether he scores or not, which is fruitful for other attackers in advanced positions. 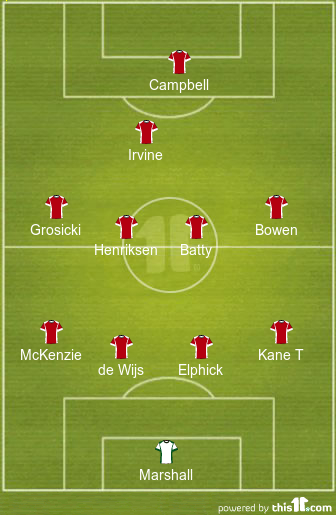