Predicted Hull City line-up to face Brentford in the Championship

Hull City will be eager to keep their three-game unbeaten run going when they face Brentford at the KC Stadium this Saturday in the Championship. Nigel Adkins’ men got a valuable point away from home at Millwall last week and should be buoyed by the fact that they are now three points clear of the drop zone.

The Tigers are up against a Brentford team who are in free fall at the moment. The Bees are now just a point ahead of their this weekend’s opponent after making such a good start to their season.

Daniel Batty and Jordy de Wijs were taken off due to subtle injuries in the previous game, however, they are expected to be fit for Saturday. Eric Lichaj is a doubt and may have to get through a late fitness, while Reece Burke is very close to return.

Jon Toral is also very close to returning to first-team action. Evandro could be back by the end of this month and Angus MacDonald is out until March.

He has made several saves throughout the course of this season to lift the team whenever required. One of the key members of the line-up.

Kane has done well after being switched to the right-back role. Expect him to keep his place.

The loanee from Aston Villa continues to impress at the heart of the Hull defence. He is right now an irreplaceable player in the team.

The previous game against Millwall was probably his best in a long while. Adkins would be hoping for more of the same.

He did a good job covering up Lichaj’s loss. With the latter still in doubt, the former should keep his place for this weekend.

Batty’s form has improved in the last few weeks except the previous one. He still remains a key player in the squad though.

The captain has done well in the previous few games. He needs to be at it in an important six-pointer against Brentford.

The Pole should start on the left wing, cutting inside and being a threat to the defenders. It will help Jackson Irvine play that central attacking midfield role.

The Australian would be better off playing centrally, linking up the play in the midfield.

He has been an ever-present threat to the defenders throughout this season. Bowen is Hull City’s trump card in the attack.

Campbell works hard on and off the ball for the team. He is better than Chris Martin in this aspect. 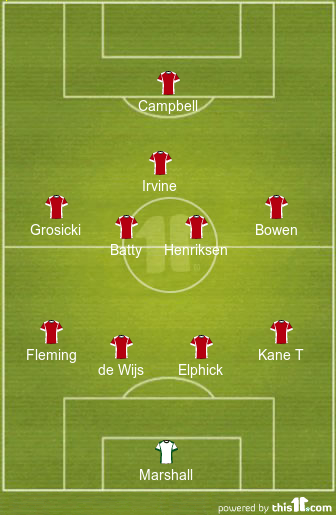