Bournemouth are set to welcome a high-flying Wolves side to the Vitality Stadium on Saturday as Eddie Howe aims to get back to winning ways.

The Cherries have lost their last two games, conceding five goals in the process. Howe’s Bournemouth are currently 11th on the Premier League table, six points off Wolves.

Nuno Espirito Santo’s Wolves are in rollicking form at the moment and head into Saturday’s game placed seventh on the table.

Callum Wilson and David Brooks are out until early March but Junior Stanislas could come back into the squad after missing the last game.

Boruc has usurped Begovic to the no.1 spot and will start against Wolves.

Clyne has made the right-back position his own since joining from Liverpool on loan in January. He is a certain starter for the weekend’s game.

The 27-year-old has been solid for Bournemouth this season and will keep his place for this crucial game against Wolves.

Ake has been excellent this term for the Cherries, impressing with his positional awareness and no-nonsense defending.

Due to his defensive diligence, Smith could be given the nod ahead of Rico at left-back.

Ibe could be handed another start after impressing against Liverpool in the last game.

One of the first names on the team sheet, Lerma is responsible for breaking the opposition’s attacks and making Bournemouth tick.

The South African is a clever player who’ll partner Lerma at the heart of the Bournemouth midfield.

Fraser has been one of the stars for Bournemouth this season. His versatility coupled with his work rate, energy, creativity and unpredictability has made him an indispensable figure for Howe.

King should play off the main striker and look to bring his teammates into the game.

With Wilson out injured, Solanke could be handed a chance to lead the attack. He will look to link-up with King and cause problems for the Wolves defenders. 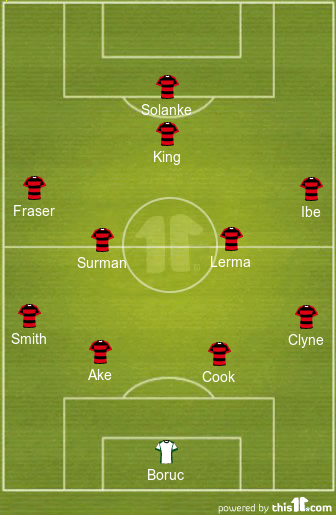