West Brom’s last outing saw them travel to Bramall Lane to face Sheffield United but due to some excellent defending by the Blades, the Baggies succumbed to a disappointing 1-0 defeat.

Despite Matt Phillips’ return from his long-term injury, they weren’t able to conjure up their regular attacking wizardry. They will be looking to bounce back when they face 2nd-placed Leeds United in what promises to be a thrilling contest with dire consequences on the table.

James Morrison remains the only doubt for this crucial encounter between the Championship’s title-chasers. Despite being back in training, it is still unknown as to whether he is fit enough to travel with the matchday squad this Friday.

The return of Matt Phillips has come as a huge boost and with the recent loss to the Blades, they’ll be looking to bounce back and with a fully fit squad, there’s no reason why they can’t pull off a surprise victory at Elland Road.

The 25-year-old has been a saving grace for the West Brom defence at times this season and has been in relatively good form.

The Everton loanee has been decent at right-back since moving to the Hawthorns and his attacking capabilities are useful.

The Englishman’s defensive performances have come under scrutiny this season. He will be looking to put an end to those talks against Leeds.

The Baggies’ main man in defence, Hegazi’s recent injury hurt them dearly and his return has brought back a degree of calmness.

The former Arsenal man has been excellent on the overlap all season and links up with the left-sided winger very well.

The Fulham loanee hasn’t been in very good form since moving to the Hawthorns but will be looking to turn up in this key clash.

The Premier League veteran’s know-how has been very important for Moore’s side and he will have to be at full thrust against Leeds.

The 29-year-old is a seasoned member of this talented side and his link-up play will be very important going forward.

The Scottish international was sorely missed by the Baggies when he was out injured and his return will be seen as motivation.

Very much West Brom’s talisman up front this season, the former Southampton star’s 17 goals have been a massive boost.

The Newcastle loanee has scored 16 times for the Baggies this term and assisted 7. He will be hoping to increase those numbers against Leeds. 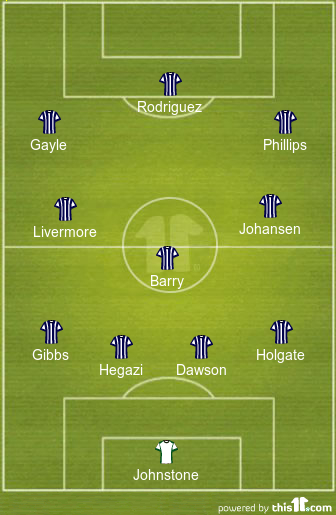