Rangers would hope to keep up their good start to the season when they face St. Mirren in the league this Sunday at the Paisley 2021 Stadium. Steven Gerrard’s men have been pretty good in all competitions so far.

They went away to face Legia Warsaw and got a credible draw in the first leg of the Europa League playoff on Thursday. In terms of league form, the Gers have won both their games in convincing fashion, which bodes well for their potential title challenge.

On Sunday, Rangers will face a St. Mirren side who have won and lost a game each in the league so far. They are a decent side at home, thus, the Gers won’t find it easy to get the three points there, especially three days after a demanding trip away to Poland. Graham Dorrans and Eros Grezda are out injured. Greg Docherty wasn’t included in the Europa League squad, but he is available for selection in the league.

Rangers’ number one keeper would continue to be in goal for the upcoming league game. He was good against Legia Warsaw on Thursday.

The captain looked defensively shaky on Thursday but did well going forward. He should keep his place in the side against St. Mirren.

After being reinstated into the Europa League squad very late on, Helander could do with his first league start in a Rangers shirt. Connor Goldson has played a lot since the start of the season and looked off colour against Legia.

Katic has become one of the leading centre-backs in the team. He is probably one of the first names on the team sheet at the moment.

Flanagan started at left-back on Thursday and did well. However, Gerrard may keep him out for the Sunday fixture, thus, a potential opportunity for Halliday to start.

Jack has been at his typical best in defensive midfield. He should keep his place in the XI for the upcoming game.

The new signing delivered another commanding performance on Thursday. He is quickly becoming one of the undroppable members of this team.

Kamara came off the bench on Thursday and should be fresh and ready to deliver the goods on Sunday.

Ojo was quiet against Legia, partly because Rangers didn’t create many chances. Other than that, he has made a good start to the season and should keep his place in the team.

The last time Defoe started a league game two weeks back, he scored a hat-trick. The veteran could replace Morelos as the leader of the attack on Sunday.

He was an unused substitute on Thursday, thus, should be fit and fresh to start against St. Mirren this weekend. 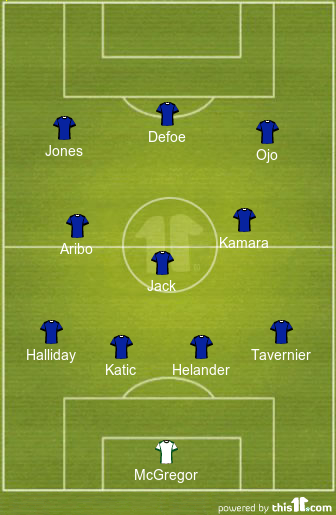