Rangers will welcome FC Midtjylland to the Ibrox Stadium for the second leg of their third qualifying round of the Europa League.

With Steven Gerrard at the helm, Rangers have looked like a promising side. Granted, they did face a few hiccups last season but this time around, they have a strong chance of making inroads in the Europa League.

The first leg against Midtjylland ended in a resounding 4-2 win and it goes without saying that they will be the favourites at home for the second leg.

There are no fresh injury concerns for Gerrard but the likes of Matt Polster, Jamie Murphy, Jake Hastie and Eros Grezda haven’t been included in the squad.

McGregor continues to be a reliable presence between the sticks and there is no reason for Gerrard to not hand him a start.

Tavernier is one of Rangers’ best players at the moment and his presence will be needed to prevent the visitors from scoring.

Goldson is capable of stopping the most fierce attackers and he should retain his spot.

Katic works well with Goldson and Gerrard should stick with the duo for this game.

Picked up a yellow card in the first leg but his heroics are needed now more than ever.

One of the better performers in the first leg, Jack’s presence will be crucial in dominating the midfield battle.

Kamara’s passes are important when it comes to linking the attack with the defence and Gerrard should hand him a start.

One of the goalscorers from the first leg, Gerrard should not think twice about handing him a start.

Jones’ pace is second to none and his lung-bursting runs are capable of wreaking havoc upon the opposition.

Scored a goal in the first leg as well and should retain his spot in the starting XI.

Morelos must aim to squeeze in a couple of early goals to intensify the pressure on the visitors. 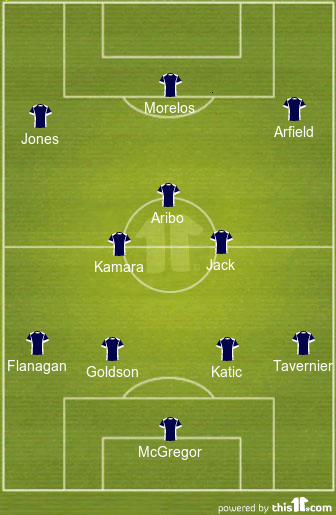