Predicted Rangers line-up to face Kilmarnock in the Scottish Cup

The Gers flexed their muscles ahead of Saturday’s cup game with a 4-2 victory over Aberdeen on Wednesday. Steven Gerrard’s side will now head into the clash confident of dumping Kilmarnock out of the Scottish Cup.

Kilmarnock, on the other hand, will look to reproduce the same kind of performance that saw them beat Gerrard’s Rangers 2-1 in the league last month.

New signings Glen Kamara and Matt Polster are working on their fitness, while Eros Grezda is injured at the moment. Meanwhile, Alfredo Morelos is suspended after getting sent off against Aberdeen in midweek.

Foderingham is Rangers’ goalkeeper for cup competitions. He will be in goal on Saturday.

Tavernier is in good form of late for the Gers. The right-back will have to be defensively strong against Kilmarnock.

Worrall must be at the top of his game to keep the Kilmarnock attackers at bay at the weekend.

Goldson could arguably be Rangers’ signing of the season. The leader of the backline, he will look to guide his team to the next round of the Scottish Cup.

Barisic’s debut season at Ibrox has been disrupted by injury problems. Now back to full fitness, the Croat will look to impress his manager.

Jack controls the tempo of the game with his passing skills. He is such an important player for Gerrard’s Rangers.

Davies’ energy and tireless running would give a different dimension to the Rangers midfield.

McCrorie does the job given by his manager, which makes him a crucial cog in the team’s engine room.

Candeias will look to supply crosses into the box and make incisive passes in the final third to trouble the Kilmarnock defenders on Saturday.

Ryan Kent has been in superb form for Rangers, running with full speed at defenders, beating them and creating chances for his teammates. He is Gerrard’s most lethal weapon at the moment.

Defoe has taken the Scottish Premiership like a duck to water after joining the Gers on loan from Bournemouth. The veteran Englishman will lead the attack against Killie at Rugby Park. 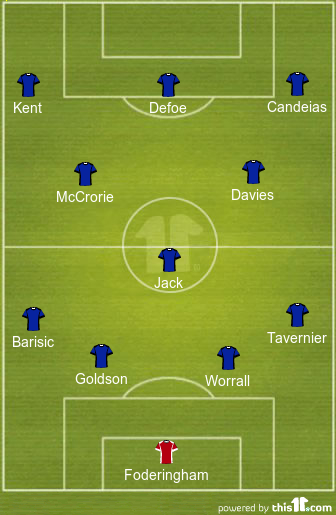