Rangers have had a couple of disappointing of results coming into this crucial fixture. While Celtic have begun to gallop away at the top of the Premiership table, the Scottish Cup remains a good chance for Steven Gerrard to deliver silverware to the Gers fans.

They have now endured two consecutive goalless draws and will be keen to bounce back to winning ways.

Gerrard’s men struggled at the weekend without star striker Alfredo Morelos after his red card against Aberdeen. His return will be a welcome boost to the Rangers attack as they look to overcome Kilmarnock.

Scott Arfield and Ryan Jack both missed the Premiership game against St. Johnstone on Saturday and though the former has a slight chance, both of them are unlikely to feature in this crucial cup tie for the Gers.

The former Hull City man came in at the start of the season and has since toppled Wes Foderingham for the top spot.

The captain of this team, the Englishman’s 9 goals and 9 assists this season show just how important he is to this team.

The Nottingham Forest loanee has impressed heavily under Gerrard this season and has made the starting spot his own in recent weeks.

This defensive giant is a former Brighton centre-half who has played in 22 of Rangers’ 26 league games this term and is expected to start this Cup tie.

One of Steven Gerrard’s summer imports, the Croatian wing-back has played 13 league games for Gers this term.

The Northern Ireland central-midfielder is on loan from Southampton and could feature due to the injury to Scott Arfield.

The Scot has really come into own over the last many weeks under Gerrard and is slowly becoming a key part of his system.

The Finnish international midfielder is formerly of Arsenal and the injury to Ryan Jack could force the 23-year-old into the side.

The Portuguese winger is a former Porto academy product who has had a very diverse career which has taken him to many countries. Should start this crucial game.

The Colombian striker was in good form in recent weeks before he picked up a red card in the emotional 4-2 away win at Aberdeen.

Acquired by Gerrard, the loanee has certainly helped the Gers with his good play and has contributed with 5 goals as well. 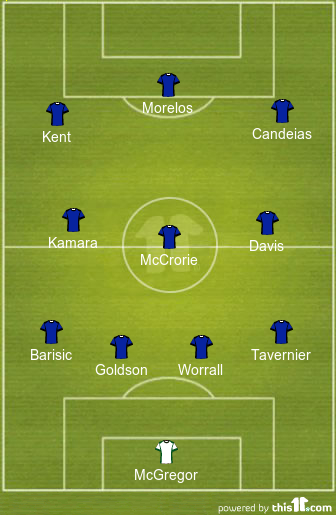