Steven Gerrard’s Rangers face a visit to the Netherlands to play Feyenoord in the Europa League on Thursday.

The Gers are on the brink of qualifying for the knockout stages of a European competition for the first time since 2011. They currently sit second in Group G, three points ahead of FC Porto and Thursday’s opponents Feyenoord.

Gerrard’s side defeated FC Porto 2-0 in the last European fixture and will be confident of getting a positive result at Feyenoord.

Rangers have a fully fit squad ahead of the game. Jordan Jones has also returned to training but he isn’t match fit yet.

McGregor is Rangers’ undisputed No.1 and should start on Thursday.

Tavernier will have to be at the top of his game to keep the Feyenoord forwards at bay.

Goldson is probably one of the first names on the team sheet. He is certain to start at Rotterdam.

The Swede put up a strong display against Hamilton at the weekend and he’ll be keen to produce something similar at Feyenoord.

Jack recovered in time to face Hamilton and vindicated Gerrard’s selection with a goal at the weekend. The Gers will need him to put in a solid shift in the middle of the park once again to thwart Feyenoord.

The veteran has been really impressive this season and there is no way he is going to be benched for this one.

Kamara adds a lot of energy and tenacity to the Rangers engine room. He will complete the Gers’ midfield trio.

Arfield is a versatile player who can play in different positions across the frontline. He should start on the right flank against Feyenoord.

Kent was on fire at the weekend as he scored a brace to help Rangers win against Hamilton. He’ll be raring to put in another solid display on Thursday.

With Alfredo Morelos in such lethal form, there is no way the Colombian will be benched for this game. He’ll start ahead of veteran Defoein the No.9 role. 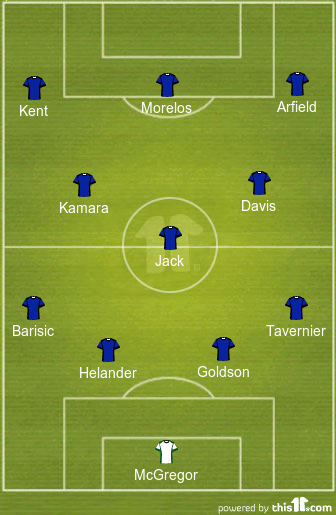