Predicted Middlesbrough line-up to face Preston in the Championship

Middlesbrough picked up an important 2-1 victory against Brentford in the league at the weekend. Boro are right up there in the chase for the title along with Norwich City and they have maintained their pace so far.

Manager Tony Pulis will now turn his attention to the mid-week Championship clash against Preston. Alex Neil’s side are also on the back of a huge win, against Blackburn Rovers, and will be aiming to continue their good run of form.

Ryan Shotton and Sam McQueen are still out and will be unavailable for this game. Apart from that, Pulis has no injury concerns to worry about.

Made a couple of important saves against Brentford and will definitely keep his place for this game.

Fry has been very fruitful with his daunting runs down the flank. He should continue at right-back.

Picked up an unnecessary yellow card against Brentford but did his duty defensively.

Ayala should come into the side and partner Flint at the back for this game in place of Danny Batth.

Friend has been defensively very strong but the full-back needs to offer more threat going forward.

Howson will continue on the right-hand side of central midfield as he uses his energy and passing to pick his teammates.

Has been slightly inconsistent but is still capable of doing the job against Preston. Needs to show more tenacity in the middle of the park.

Has looked good since making the move to Boro this season. He will definitely continue in central midfield.

Always a threat with his running and crosses down the flank. He will surely start this game.

Scored for the second game running and will definitely lead the line for Boro in this game against Preston. Expect him to find the back of the net again.

Read more: Middlesbrough signing this PSG teenager in January would be a huge boost to their promotion push

Despite scoring last time out, Marcus Tavernier could be replaced by Assombalonga on the left flank for this game. 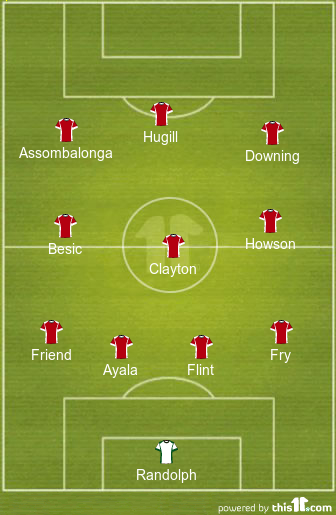