After just about getting past Watford, Manchester United would be aiming to keep their positive vibe going when they face Wolves at the Molineux.

The game at the weekend was the first after Ole Gunnar Solskjaer’s permanent signing, and it is safe to say that United will have to improve if they are to get all three points away at Wolves.

We witnessed the same fixture in the FA Cup a month ago and the Red Devils were outplayed by a mile. In the league though, they have everything to play for, hence, every game is close to a must-win.

Alexis Sanchez out until the end of this month with a knee injury. Eric Bailly and Matteo Darmian are out. Antonio Valencia is still few days away from returning to action.

Anthony Martial and Romelu Lukaku are fit for the game tomorrow.

The Spanish international is their first-choice keeper and is certain to be in goal for this game.

The experience of Young would be required in a potentially tough game at the Molineux.

He has been solid at the back and should keep his place in the team.

The Sweden international is back fit and should partner Smalling in central defence.

He has been in great form at left-back and is certain to start against Wolves.

He was back fit and played well against Watford. Hence, the Serbian international is expected to start.

He remains a key player in the midfield for United and should start this game.

His form has dipped in the last couple of games and would have to raise it if United are to beat Wolves.

The Frenchman was in doubt for this game but he is now ready to start against Wolves.

He scored a great goal against Watford and should continue to lead the line against Wolves.

Juan Mata may struggle playing on the right wing, hence, Lingard should start in that position tomorrow night. 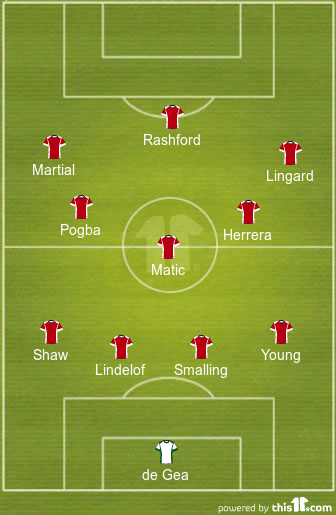