After a narrow home defeat at the hands of Barcelona, Manchester United would be aiming to come back to form in the league when they face West Ham at Old Trafford this Saturday.

Ole Gunnar Solskjaer’s men have gone off the boil in the last few games. After the international break, they narrowly edged past Watford, before being beaten by Wolves. As a result, they are currently sixth in the table, three points off the top-four.

Hence, getting a win this weekend is vital for United, if they are to keep their Champions League hopes alive.

Luke Shaw and Ashley Young are suspended for this game. The former has 10 yellow cards to his name, while the latter got sent off at Wolves.

Nemanja Matic and Ander Herrera have knocks and will be touch and go for this weekend. The former is more than expected to return when compared to the latter.

Alexis Sanchez could be in the squad for this game after doing loads of recovery work. Eric Bailly had a head injury that is going to keep him out for this weekend as well.

He is their first-choice keeper and is expected to be in goal this weekend.

With Young out and Dalot expected to fill in at left-back, we could see Jones starting at right-back.

The Englishman has been in impressive form of late and deserves to keep his place in the team.

The Swede is expected to partner Smalling this weekend. The duo would be aiming to keep a clean sheet against a struggling West Ham.

With Young and Shaw out, we could see Dalot deputising at left-back.

The Serb was expected to feature against Barcelona but just couldn’t make the cut. Hence, we could see him start on Saturday.

He was close to invisible on Wednesday. The Frenchman must improve if he is to make an impact against West Ham.

The Brazilian has been doing a decent job in the midfield and should get another start this weekend.

He came off the bench against Barcelona and is expected to feature from the start this weekend.

The Belgian scored a brace in his debut game for Manchester United, which was against West Ham at Old Trafford. He would be aiming to repeat that on Saturday.

Marcus Rashford has had some fitness issues but he started against Barcelona. Expect the Englishman to be on the bench and Mata to start. 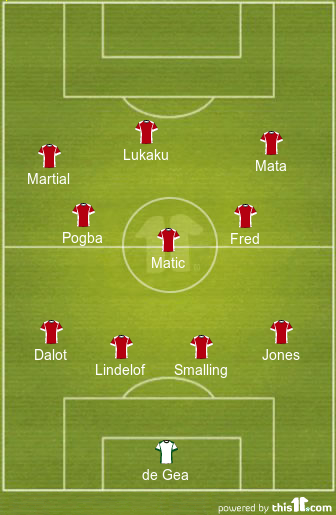