Manchester United will face off against Valencia in the final group stage game of the Champions League on Wednesday.

Thanks to Marouane Fellaini’s late winner in their last match against Young Boys, the Red Devils head into the game already assured of at least second place in the group.

Given that Manchester United travel to Anfield to face Liverpool at the weekend, Jose Mourinho is expected to ring heavy changes to his line-up at Valencia on Wednesday.

Chris Smalling limped off during last weekend’s victory over Fulham and remains a doubt. Luke Shaw, Eric Bailly and Anthony Martial missed the Fulham game with injuries and are most likely to not be risked by Mourinho.

Mourinho has confirmed Romero will start between the sticks for Manchester United on Wednesday.

With Smalling and Bailly a doubt, Jones should start in central defence for United.

Partnering Jones in central defence would be Rojo, who will have to be the top at the top of his game to keep the Valencia attackers at bay.

Scored a screamer in the 4-1 victory over Fulham and will be eyeing a goal against Valencia.

The United manager has confirmed Pereira will start Wednesday’s Champions League game. Pereira will look to impress his manager against the Spanish opponents, the club where he spent time on loan last season.

Another player who has already been given a green signal to start against Valencia; Pogba should look to put in a stellar display and get back into the starting XI against Liverpool.

Fred has played very little for the Red Devils since his summer switch from Shakhtar Donetsk. Like Pereira and Pogba, he must grab the opportunity with both hands.

Lingard’s pace and directness could give the Valencia defenders a tough time on Wednesday evening.

Once a fan favourite at Valencia, Mata could start on the right-hand side of the front three for the visitors.

Back amongst the goals with two strikes in last three games, Lukaku would be hungry to get on the score-sheet at the Mestalla Stadium. 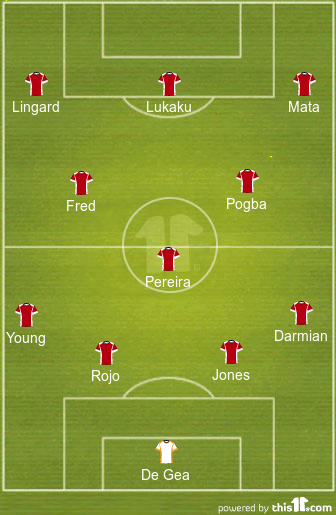