After scraping through a draw against rivals Liverpool amidst injuries galore, Manchester United would be aiming to get back to winning ways when they face Crystal Palace away at Selhurst Park this Wednesday.

Ole Gunnar Solskjaer’s men were hit by three injuries in the first half, forcing the manager to make all the substitutions due to circumstances.

They are up against a Palace side who thrashed Leicester City at King Power Stadium and look in good form. The Eagles are always a tough proposition to play against at Selhurst Park, hence, it won’t be easy for the Red Devils.

Juan Mata, Ander Herrera and Jesse Lingard went off injured on Sunday and it would be a surprise if any of the three started on Wednesday. Marcus Rashford played the game through swollen ankle and may not feature against Palace as well.

Nemanja Matic had a groin problem before the Liverpool game and will be out for a few weeks.

Anthony Martial and Antonio Valencia are recovering well from their respective injuries, however, expecting them to play on Wednesday could be a tall order.

He kept his 100th clean sheet in the Premier League against Liverpool and would be gunning for more, starting on Wednesday.

With injuries mounting, we could see Ashley Young on the right wing, which means a chance for the young Dalot at right-back.

The centre-back duo of Smalling and Lindelof did a very good job on Sunday and expect them to start against Palace.

Since the arrival of Solskjaer, the Swede has been on a different level at the back. His consistency is helping the manager to pick him week in week out.

The Englishman put in a man-of-the-match performance against Liverpool by shutting down Mohamed Salah. He would be high on confidence going into the game on Wednesday.

The youngster did well in the big game in the absence of Matic. Something similar would be required on Wednesday.

The Frenchman has been in great form since the change in manager. Amidst all those injuries, his form will be key to the team’s success in the next 2-3 games.

The youngster did well when subbed on to replace Herrera. The manager would be hoping for more of the same against Palace.

With Martial, Mata, Rashford and Lingard out, Young could have a chance to play at right-wing, a position where he started his career.

The Belgian would get his chance to lead the line, having done a terrific job on the right wing against Liverpool.

This could be Sanchez’s chance to make a statement. All the key players are out, hence, the Chilean can stake his claim for a spot in the team with a fantastic performance against Palace. 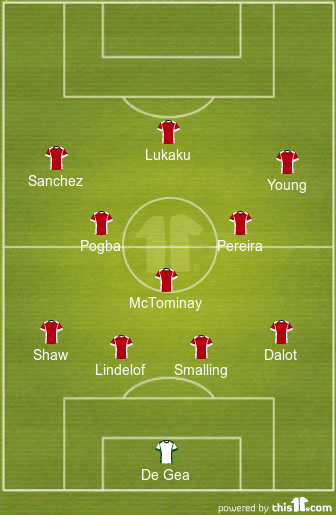