Defending champions Manchester City would be aiming to keep their good form going when they face Wolves at the Etihad on Monday night. Pep Guardiola’s men defeated league leaders Liverpool in their previous league game to cut the gap to four points at the top, with the title race destined to go down the wire.

However, they are up against a Wolves team who have had a terrific season so far. Nuno Espirito Santo’s men have got points against every big team this season, except Liverpool, who they defeated in the FA Cup. In the reverse fixture, the Old Gold played well and held City to a draw. Hence, this game isn’t going to be easy for the Cityzens.

Sergio Aguero and Vincent Kompany have had problems since the Liverpool game, but both are expected to be in contention to start on Monday. Benjamin Mendy and Claudio Bravo are long-term absentees.

The Brazilian starts every league game, regardless of whether Bravo is fit or not. He will continue to do so.

Kyle Walker got the cup game to improve his form, but Danilo did well against Liverpool and should start this game.

He is expected to start this game and should do so to provide experience to the back-line which hasn’t been good in the league lately.

The Frenchman has been one of the better defenders for the Cityzens this season and deserves to start almost every game.

Young Zinchenko got the chance to play the cup game, hence, the manager could revert to the experience of Delph against Wolves.

After a herculean performance against Liverpool, the Brazilian rightly got a week off. He will be refreshed for this game.

The Spaniard started the EFL Cup game after his injury and should do the same on Monday.

The Portuguese was immense against the Reds last time out in the league. With Kevin de Bruyne still getting back to match fitness, Bernardo should keep his place.

He was an unused sub against Burton and should be fresh to start this league game.

The Argentine is fit to start this game. His goal against Liverpool was an example of what City were missing when he was out for a few games in December.

Read More: Who is this £27m starlet that Liverpool are battling Man City for? A huge talent on the rise?

The German’s goal against Liverpool was as important as it gets and he has raised his game to a new level this season. He should start every league game. 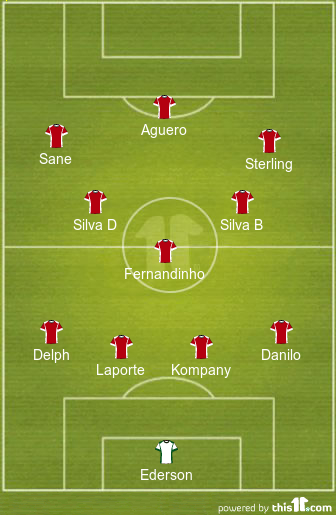