Premier League defending champions Manchester City would be aiming to continue their charge in the league when they face West Ham United at the London Stadium this Saturday. Pep Guardiola’s men were comfortable winners against city rivals Manchester United a fortnight ago and look in good stead to stay on top of the table.

They are up against a West Ham side who are an unpredictable bunch. Manuel Pellegrini has got them playing some good football but you never what you will get from them, especially against big teams.

The Cityzens are clear favourites to win this game, however, as we mention time and time again, every game is a potential banana skin in the Premier League.

Kevin de Bruyne suffered an injury against Fulham in the EFL Cup and will be out until mid-December. Benjamin Mendy has also picked up an injury and would be out for a few weeks.

Nicolas Otamendi is nursing a calf/shin injury and the weekend game will come too early for the Argentine. Bernando Silva suffered a muscular injury during the international break and might not be risked for Saturday.

The Brazilian played one international friendly and should be fresh to start this game.

Walker has been an ever-present at right-back and starts most games unless there is an injury or fatigue.

Stones’ form at the back has been phenomenal alongside Aymeric Laporte.

The Frenchman is probably the best player for the Cityzens this season. His defensive sturdiness and passing from the back is impeccable.

With Mendy injured, we may see the experienced Delph lined up as left-back.

The Brazilian is one of the most important players in the team. His work rate is exceptional.

The senior Silva has been running games on his own in the past weeks, which is a terrifying prospect for any opposition.

With Bernardo Silva nursing a slight injury, the German should be back in the line-up. He will be buoyed after scoring the nerve-settling goal against United.

The Englishman signed a new contract before the international break and is one of the most important players in the Guardiola system.

Aguero’s goal-scoring exploits continue to reign supreme, game after game. He starts every league game based on current form.

Read More: 4 goals, 6 assists in 11 games – Man City have made a grave mistake by offloading teenage prodigy in the summer

The Algerian is slowly but surely understanding the demands of playing for Manchester City. His quality is right up there with the best as well. 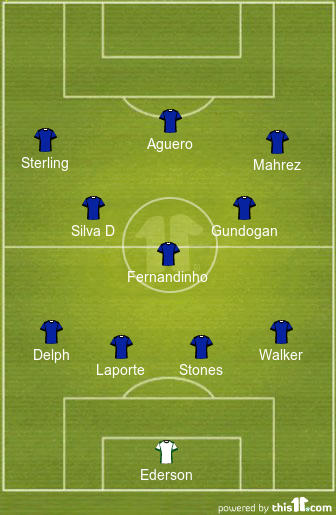