Premier League champions Manchester City would be aiming to take one step closer to knockout qualification in the Champions League when they face Shakhtar Donetsk this Wednesday. Pep Guardiola’s men went to Ukraine two weeks back and were relentlessly good in a 3-0 win.

Now, they face the same team in a return leg at home with expectations of winning. However, Shakhtar are no easy team as they lead the race in the Ukrainian Premier League and would be better equipped to guard a stern challenge from the Cityzens.

Hence, there should be no let up from Pep and his men in a tight group where every team still has a chance to qualify.

Ilkay Gundogan and Nicolas Otamendi are close to a first-team return but the Wednesday game might be too soon. Kevin de Bruyne is out for another four to six weeks, meaning we could see the Belgian during the Christmas period.

The Brazilian has been typically secured and good with his feet. Expect more of the same when we see him in action on Wednesday.

The Englishman shows no signs of tiring after a long World Cup run. He seems to get fitter and more hungry for success on the field.

The centre-back partnership of Stones and Aymeric Laporte is succeeding at the highest level. The former is a dominant presence in the air and is good on the ball.

The Frenchman has probably been one of the best players for City this season. His consistency at such a tough position is incredible.

The left-back is dangerous going forward but needs to cover more grounds defensively.

The Brazilian is one of the most important players in Guardiola’s system. His shielding of the back line and winning second balls to sustain attacks is imperious.

The Spaniard has been at his best in the past few games with his magical feet. He seems to get better as the years go by.

With De Bruyne still out and Gundogan a doubt, we may see Bernardo Silva operating in that position again. The Portuguese has done superbly in his absence.

The Algerian was rested for the game against Southampton, hence, we should see him in action on Wednesday.

Jesus started when City played in Ukraine. We may see him leading the line at the Etihad this week.

The German was at his superlative best when City thrashed Saints in the Premier League. Expect the manager to start him. 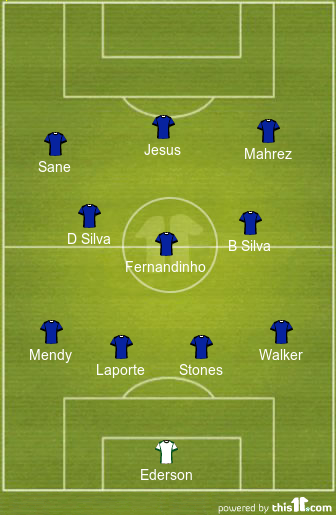