Manchester City coming into this crucial round of 16 away fixture at the Veltins Arena on the back of a commanding 4-1 victory against lower league minnows Newport County. They looked at their impressive selves throughout the match and the squad selection by Pep Guardiola also showed amazing respect to the opponents.

They will be looking to keep their European run going as they are one of the few clubs who still have a realistic chance of winning all four trophies they’re involved in. With the EFL Cup final against Chelsea around the corner, expect this to be a feisty tie against strong German opposition.

Club captain Vincent Kompany remains on the sidelines because of a slight knock and isn’t expected to be back for this fixture either. Claudio Bravo is also ruled out of this fixture with a leg problem and this means youngster Aro Muric would get his place on the bench.

First choice left-back Benjamin Mendy is still unavailable because of a long-term knee injury and is out of this match. His return date is unsure but he is in the latter stages of his recovery process.

The Brazilian showstopper has been in exceptional form all campaign and the control he offers with the ball at his feet makes him an assured starter.

The former Tottenham man has been one of City’s most potent attacking threats this campaign and expect this trend to continue in Europe.

The Englishman didn’t start in the cup fixture against Newport and is expected to return for this important game in Europe.

The Frenchman has been Guardiola’s first choice defender this term and has looked solid in every position he’s played in.

The Ukrainian prodigy showed his class in the demolition of Chelsea and with Mendy out with a prolonged problem, expect him to start.

The Belgian’s injury problems have deterred his progress this season but he is expected to feature in this key fixture for City.

The Brazilian destroyer is an important part of Guardiola’s setup and is expected to feature against the German club.

The German’s sharp passing in the midfield has become a key weapon in City’s attacking arsenal this campaign.

The Portuguese magician has really come into his own this term and is expected to come into the side to give Mahrez a rest.

The man in form, Aguero’s hat-trick against the Blues once again highlighted his immense quality and this should be enough to ensure he starts.

He tore Cesar Azpilicueta to shreds against Chelsea and will be looking to have the same effect on this fixture against Schalke. 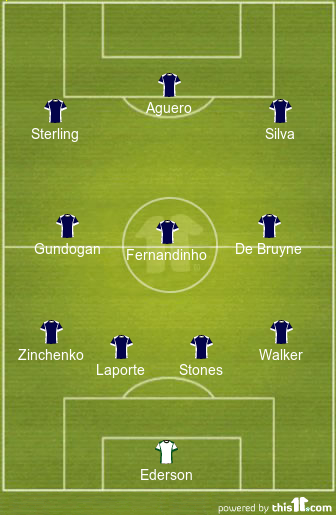