Champions Manchester City welcome city rivals Manchester United at the Etihad Stadium in this season’s first Manchester derby. The Cityzens are leading the table with two points thus far and again build themselves a team to beat under Pep Guardiola.

They thrashed Southampton 6-1 in their previous league game, while drubbing Shakhtar Donetsk 6-0 in the Champions League. United also got a very important result when they came from behind to beat Juventus in Turin. That result is certain to give them a huge lift ahead of an all-important derby game against the rivals.

Ilkay Gundogan and Nicolas Otamendi are ready if required for the weekend. Kevin de Bruyne is out, probably till December.

The Brazilian has been a secured presence in goal for the Cityzens. He will keep his place on Sunday.

The Englishman continues to evolve as a player and become an important asset to the team.

Stones’ partnership with Aymeric Laporte is flourishing game by game. Good to see the manager now sticking with this duo for a number of games. Expect these two to start on Sunday as well.

The Frenchman didn’t feature in the Champions League game on Wednesday. He is expected to start on Sunday.

The orchestrator of the team is a certainty unless there is an injury or suspension issue.

The international retirement has helped him to fully concentrate on club football and be a real difference-maker for the Cityzens.

In the absence of de Bruyne, the Portuguese Silva has done well to perform well in the midfield position.

The Englishman has been in great form in terms of scoring as well as creating chances for the team. he should start on Sunday.

The Argentine was on the bench on Wednesday witnessing Gabriel Jesus netting a hat-trick. He should be back leading the line against the City rivals.

Read More: Another Jadon Sancho in the making? Man City must go all out and tie down this 19-year-old ace to a new contract

Sane was on the bench as an unused sub and should be back in the starting lineup against Jose Mourinho’s men. 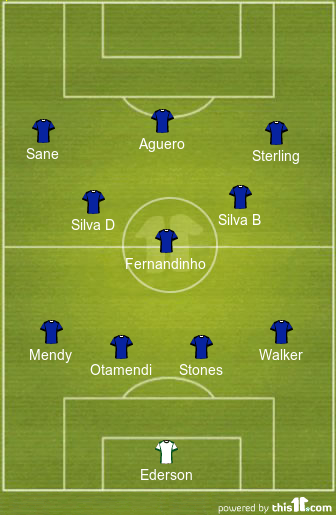