Manchester City will be aiming to return to winning ways in the league when they face Everton at the Etihad this Saturday. Pep Guardiola’s men suffered their first defeat of the league campaign at Chelsea last week, resulting in them dropping to second spot in the table.

They will now be looking to keep the pressure on leaders Liverpool by winning the lunch-time kick off game against Toffees.

Meanwhile, Marco Silva’s men should be disappointed to get two points from back-to-back home games against Newcastle and Watford. They have to play very well to get something out of the game against Man City.

Benjamin Mendy is out until New Year, while Kevin de Bruyne is still taking time to return to action. David Silva is out for a few weeks and Sergio Aguero is still out due to injury. Danilo is out for long-term, while John Stones suffered an injury while playing against Hoffenheim but the Englishman will be back soon. Fernandinho has a thigh issue and might be out for this game.

The Brazilian makes vital saves and is very good with the ball at his feet. He starts every league game.

He came off the bench against Hoffenheim and should start on Saturday.

With Stones carrying a knock, the club captain could start this game alongside Aymeric Laporte.

The Frenchman has been the best defender for the Cityzens this season. He will start this Saturday unless there is an injury concern.

With Mendy out long-term, Zinchenko might get an extended run in the team at left-back.

With Fernandinho carrying a knock, we could see Gundogan playing the holding midfield role this weekend.

The Portuguese has a job in his hands to carry the midfield through in the absence of big stars.

The youngster was fantastic in the midweek game. With David Silva and De Bruyne out, he is expected to start again this weekend.

The German has been in great form in the past month or so. Guardiola would hope he continues to deliver for the team.

Sterling’s best position is in the wide areas and it was reiterated against Hoffenheim. Hence, he should start on the right.

Read More: Man City over Chelsea would be the ideal destination for this promising 18-year-old and here’s why

The Brazilian needs a goal and soon. City are missing Aguero just because Jesus hasn’t hit the ground running this season. 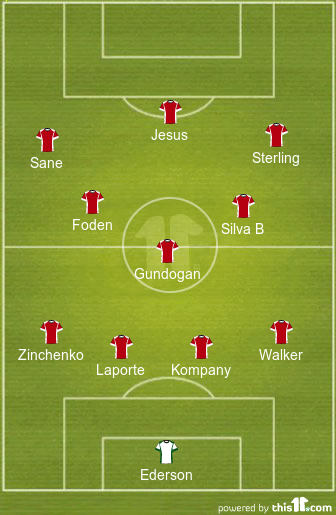