Interim Manchester United boss Ole Gunnar Solskjaer faces a real challenge on Wednesday against Paris Saint-Germain amidst an injury crisis for his side.

Solskjaer’s men edged past Southampton in a 3-2 thriller on Saturday and moved back to fourth place in the Premier League table.

However, facing a two-goal deficit ahead of their trip to Paris in the Champions League, the Red Devils’ squad has been depleted by injuries in recent weeks, meaning Solskjaer and his boys will have a mountain to climb.

PSG earned a 2-0 win in last month’s Champions League last-16 first-leg tie at Old Trafford and as a result, they are now the favourites to go through.

Manchester United are already without the likes of Ander Herrera, Juan Mata, Nemanja Matic and Jesse Lingard for the game in France, while Paul Pogba is also suspended.

Anthony Martial has been ruled out of the game at Paris and Alexis Sanchez misses out due to a knee injury he suffered in the 3-2 victory over Southampton.

He will face a stellar test on Wednesday and has to be at his best to keep his team alive.

Young is expected to retain his place at right-back. He’ll have to be at the top of his game to keep PSG at bay.

The centre-back duo of Smalling and Lindelof did a very good job on Saturday and expect them to start against PSG.

Since the arrival of Solskjaer, Lindelof has been on a different level altogether. The Swede has brought stability to the backline and he is expected to start again.

Shaw continues to impress under Solskjaer. He is playing with confidence and deserves to keep his place in the team.

McTominay has done well in the absence of Matic. He’ll have his task cut out against PSG on Wednesday.

Fred hasn’t played much in his debut season at Old Trafford. With Pogba suspended and so many injuries to deal with, the Brazilian is certain to start.

Pereira scored a belter in the 3-2 victory over Southampton. The manager would be hoping for more of the same against PSG.

Dalot changed the game on Saturday after replacing Sanchez at right-wing. He should be deployed in the same position in the midweek game.

Rashford has been in good form under Solskjaer but has thrived through the middle. On Wednesday, he should be given a role on the left to accommodate Lukaku.

With 4 goals in the last two games, Lukaku would be high on confidence going into the second leg in Paris. 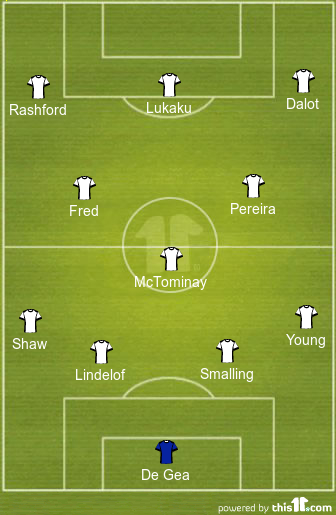