Manchester United close out 2019 with a trip to Turf Moor to take on Burnley as they aim for three points on Saturday.

The Red Devils bounced back from a shock defeat at Watford with a 4-1 win over Newcastle United on Boxing Day. They had to come from behind after Matty Longstaff had given the Magpies a shock lead at Old Trafford.

Ole Gunnar Solskjaer will be wary of Burnley, who despite a defeat to Everton on Friday, are a dominant force at home.

Manchester United will be without Scott McTominay, who injured his ankle ligaments against Newcastle. But Axel Tuanzebe and Marcos Rojo are expected to be available for the game.

It hasn’t been a great season for De Gea as he is still searching for form. Nonetheless, he is a certainty to start between the sticks on Saturday.

The right-back has become one of United’s key players under Solskjaer. He is an undoubted starter against the Clarets.

The Swede has blown hot and cold this season, however, he will have to cope well with the aerial threat of Ashley Barnes and Chris Wood.

Maguire has been an assuring presence at the back and he’ll aim to help the Red Devils keep a clean sheet.

Shaw has walked straight back into the starting XI after recovering from a groin injury. He’ll keep his place at left-back.

With McTominay injured, Matic could be handed an opportunity to bring calmness in the middle of the park. The experienced Serb will aim to prove his doubters wrong on Saturday.

The Brazilian seems to have regained his mojo and looks confident on the ball now. He’ll have to be at his best against a physical Burnley side at Turf Moor.

Pogba replaced the injured McTominay at half-time against Newcastle and did really well in midfield. The Frenchman is in a line for a start and the manager will expect a big performance from the midfielder.

It’ll be extremely harsh on Greenwood to get dropped after a strong performance against Newcastle. Solskjaer could go with James, who offers raw pace on the flanks and has proved to be a headache for the opposition.

Rashford is in the form of his life and the goal against Newcastle would give him a lot of confidence ahead of the Burnley game.

Martial bagged a brace in the 4-1 win over the Magpies on Boxing Day, taking his goal tally to six league goals. The Frenchman will be crucial in opening up the tight Burnley defence as Solskjaer’s side look for back-to-back wins. 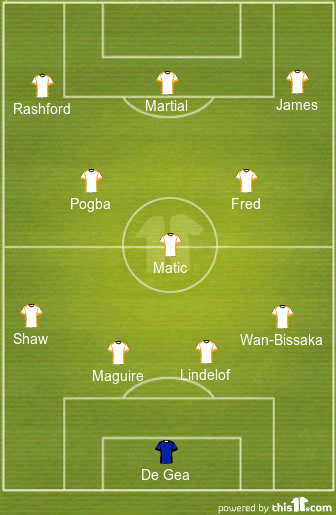