Manchester City would be aiming to produce a comeback in the Champions League last-eight tie against Tottenham at the Etihad. Pep Guardiola’s men lost the first leg 1-0 in London last week, hence, they have it all to do on Wednesday night.

The manager made some weird team selection calls in the first leg that raised many eyebrows. If they are to go through to the semis, the starting XI has to be perfect against a talented Spurs side.

Not scoring an away goal means City would be vulnerable on the counter for conceding one and then having to force the issue. Hence, they have to be calculated in how they approach this tie for the next 90 minutes.

Fernandinho is a doubt for this game, which is bad news for the City fans. Oleksandr Zinchenko has a thigh problem. He is touch and for this game.

He is their first-choice keeper and a certain starter for this game.

Walker has been in form of late, hence, he should continue to start at right-back.

He hasn’t played much recently due to injury issues. Expect the Englishman to be back in the XI for this game.

The Frenchman is their first-choice defender, be it at centre-back or left-back. He may start in central defence on Wednesday.

Benjamin Mendy played on Sunday and starting him on Wednesday could be a risk. Fabian Delph started at left-back last week and didn’t look comfortable. Hence, we could see Danilo be given the nod.

With Fernandinho a grave doubt for this game, Gundogan should continue deputising in defensive midfield.

The Belgian is slowly regaining top form, which might be bad news for Tottenham. He should start on Wednesday.

Didn’t do much in the first leg. A lot more would be expected of him in this crunch clash.

The Portuguese international is back to full fitness and should reclaim his place in the team.

The Argentine missed a penalty in the first leg, which may still cost Manchester City. He needs to make a statement in this tie come Wednesday.

On current form, there is hardly any attacker better than Sterling (except the Messis and Ronaldos). He is probably one of the first names on the teamsheet. 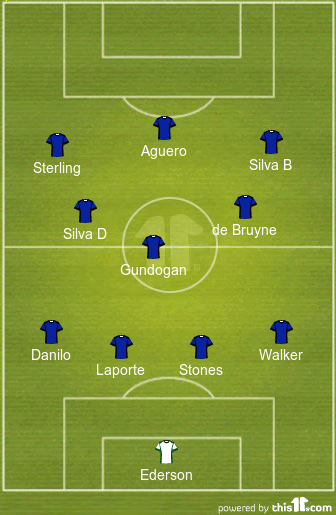