Manchester City’s run-in to this important fixture in the Champions League was quite a comfortable one. Having dispatched Watford by a 3-1 scoreline at the weekend thanks to a hat-trick from Raheem Sterling, they will be looking to enhance their chances of European success by progressing.

They will be welcoming Schalke in the 2nd leg of the Champions League round of 16 which they have an aggregate lead of 3-2. With 3 away goals to their name already, they will be looking to cruise past Schalke side.

Former Barcelona goalkeeper Claudio Bravo remains sidelined with a leg problem with no specific return date. Kevin De Bruyne’s nagging thigh injury has seriously deterred his playing time this season and he is a doubt for this fixture as well.

John Stones picked up a slight niggle, which is set to keep him out of this game with first-choice midfielder Fernandinho also a massive doubt for this fixture. Another knock in the City squad is the illness to Fabian Delph, which makes him doubtful for this clash.

The Brazilian keeper has been in fine form this season and has certainly repaid Pep’s trust in his shot-stopping abilities.

The Englishman is a former Spurs player and this shows on the pitch as he exudes dynamism and energy throughout the pitch.

The French defensive sensation has been utilised in multiple positions Pep this season and he is expected to start.

With John Stones out injured and Nicolas Otamemdi suspended, Kompany could be in for a start as they look to overcome Schalke.

The Ukrainian prodigy has really stepped up to the plate whenever he has been given a worthy opportunity by Pep.

The 24-year-old Portuguese midfield sensation was signed from Monaco for a fairly large fee prior to the start of last season.

The former Borrusia Dortmund star has been very good in the deeper role whenever he has been asked to deputise for Fernandinho.

The Spaniard just seems to get younger by the day as the finesse and class he portrays on the ball certainly haven’t depleted.

The English speedster has been in excellent form and will be key if City are to progress in the Champions League.

The Argentine talisman is currently displaying the form of his life, having been consistently unplayable this season.

The German international winger has seriously improved his attitude under Pep and his efforts have certainly paid dividends for City as well. 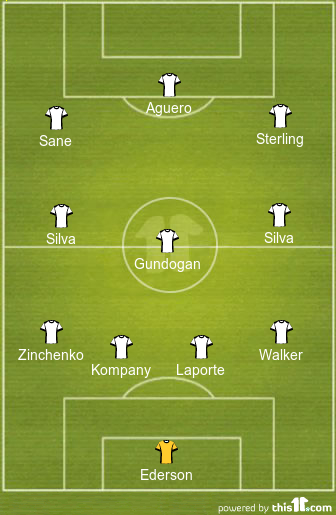