Manchester City will continue their bid for FA Cup when they face League Two outfit Newport County in the fifth round on Saturday.

Pep Guardiola’s men have reached the last 16 of the FA Cup by recording comprehensive victories over Rotherham United and Burnley. City produced one of their best performances of the season on Sunday as they battered Chelsea 6-0 at the Etihad Stadium.

The Cityzens are overwhelming favourites for this game as Guardiola would expect his team to do the job over Newport County and advance to the next round.

Claudio Bravo and Vincent Kompany are out injured but there is an outside chance of Benjamin Mendy returning to the City squad for this weekend’s game.

Ederson is City’s undisputed No.1 in goal and he should start against Newport County.

Danilo needs to step up and prove his worth to the team. He is expected to start at right-back.

Otamendi has found game time hard to come by this season but he is expected to start against Newport County.

Laporte is enjoying a stellar season for Manchester City. He should start alongside Otamendi in central defence.

Zinchenko did very well in the 6-0 thrashing of Chelsea and deserves to keep his place in the team.

Delph could be handed a start at the weekend and the diminutive Englishman will look to gain control of the game from the very beginning.

Gundogan is a box-to-box midfielder who will look to slip in incisive passes in the final third for City’s attackers to feast upon.

Foden is one of the sublime young talents in the Premier League and is expected to start on Saturday.

Mahrez has blown hot and cold in his debut season at Manchester City. However, the skilful Algerian could start on the right wing against the League Two opposition.

Guardiola might look to use Sane’s pace and unpredictable movement to terrorise the Newport County defence.

Read more: This 6ft 3in midfield giant would be a perfect replacement for Fernandinho and Man City must get him

Jesus is an instinctive striker, a dangerous customer in and around the box. He could be asked to lead City’s attack on Saturday. 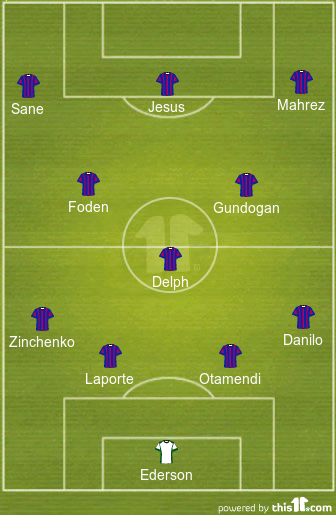