Defending champions Manchester City would be aiming to keep their winning run going in the league when they face Bournemouth at the Etihad this Saturday. Pep Guardiola’s men were rampant winners against a hapless West Ham United last weekend, but they were held to a credible draw at Lyon in the Champions League.

They will now be looking to come back to winning ways in the league and keep the distance up at the top. The Cityzens are up against a Bournemouth team who have played some sublime football this season, but are coming into this game after three consecutive losses. Hence, Eddie Howe’s men will be aiming to get a positive result if possible.

Kevin de Bruyne will return to action by mid-December while Benjamin Mendy is out at least until New Year. Bernardo Silva, Ilkay Gundogan and Gabriel Jesus, the trio who missed the trip to France due to niggling injuries, should be fit for this weekend’s match.

The Brazilian couldn’t have done much to save the two goals conceded against Lyon. His distribution keeps on improving every week.

The Englishman played a rather reserved role at right-back in France. Expect him to flex his muscles forward on Saturday.

The Argentine started the previous league game and looked at ease. Expect him to start alongside Aymeric Laporte.

The Frenchman has been the best defender for the Cityzens this season. His game awareness and passing ability are right up there with the best.

Delph came on as a substitute against Lyon, hence, expect him to start at left-back against the Cherries.

He has started every league and Champions League game so far. However, this might not be the right match to rest him.

We have seen Silva running games with his magical feet this season. Eddie Howe’s men need to keep an eye on the Spaniard.

The Portuguese missed the last two games with a niggling injury, but he is expected to be fit for this game.

The Englishman will be seeking to continue his goal-scoring run in the league. He is probably the most improved player under Guardiola.

Aguero missed out against West Ham but he is an ever-present danger to any defence in the league.

Read More: Man City would be foolish to commit the blunder they did with Sancho and they should hold onto this 19-year-old prodigy

After bamboozling Pablo Zabaleta last week, Simon Francis is next on the list for the German. Francis has to be at his best to thwart the flying winger. 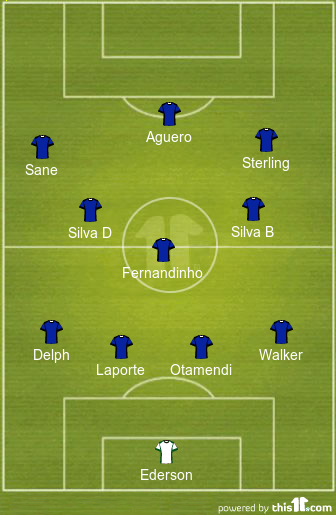