Liverpool were made to share the points against Arsenal in the league this weekend but the Reds are still yet to be beaten in the competition this season. Klopp’s men will now turn their attention to the mid-week clash against Red Star Belgrade.

The Reds dispatched the Serbian outfit last time out at Anfield but this game will pose a lot tougher given they travel to the Rajko Mitic Stadium. Klopp must definitely go for the win, which should pretty much ensure their qualification into the next round.

Jordan Henderson and Naby Keita are still on the way to complete recovery and will mostly be kept out of this game. Dejan Lovren is also said to have suffered a slight knock and will be unavailable.

Reports also suggest that Klopp might leave Xherdan Shaqiri out of the line-up in order to avoid any controversy from the Serbian fans due to the player’s Kosovan roots. Apart from that only Alex Oxlade Chamberlain is injured and Klopp can otherwise field his strongest line-up.

The Brazilian should continue in goal for this game after being tested against the Gunners.

Gomez must be shifted to the right for this game, giving Alexander Arnold a rest before the Premier League clash.

Matip could take Gomez’s place in the middle of the park as Dejan Lovren recovers from a knock.

Could have had a hat-trick against Arsenal but was unfortunate. He should lead the backline for this game as well and aim to shut out the Serbian side.

Robertson must be in line to start this game after showing a slight dip in form. His defending has been good but the Scot needs to offer more going forward.

Lallana must come into the side for this fixture in place of Georginio Wijnaldum. The midfielder must now aim to resurrect his career at Liverpool.

With both Henderson and Keita out, Fabinho should continue to dictate play in the middle of the park.

Scored his 50th goal against the Gunners and will be in full confidence for this one.

Salah seems to have found his scoring form at last. The Egyptian must now aim to make the best out of it.

The only player who has lacked a cutting edge and has failed to score on a consistent basis. However, he has scored important goals in the Champions League this season.

Mane’s pace and trickery are always difficult to deal with. The Senegal international will definitely trouble the Red Star backline. 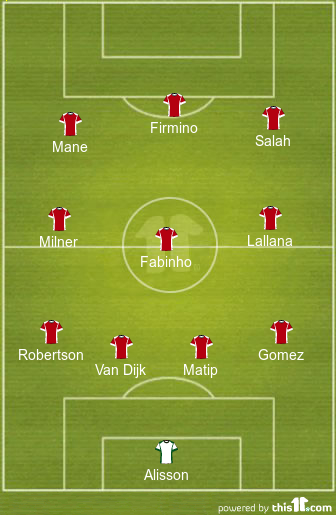