Liverpool host Red Bull Salzburg to Anfield on Wednesday night looking to pick up the first win of their latest Champions League defence.

The Reds lost 2-0 to Napoli in Italy for the second successive season, leaving Jurgen Klopp’s boys playing catch-up in Group E. They have enjoyed a 100 per cent start in the Premier League and Klopp will hope his team gets a victory on Wednesday.

Salzburg, on the other hand, were triumphant in their first group stage game with Erling Haland grabbing a hat-trick in their 6-2 destruction of Belgian side Genk.

Alisson is making good progress from the calf injury he sustained on the opening day of the season but Wednesday’s game is expected to come too soon for him.

Naby Keita is in line for a return following his battle with a groin injury, but fellow midfielder Xherdan Shaqiri remains sidelined due to a foot problem.

In Alisson’s absence, Adrian has done well in goal. He will keep his place in the team against RB Salzburg.

One of the best right-backs in Europe, Alexander-Arnold is an undoubted starter on Wednesday.

Matip has been excellent besides Van Dijk, showing a lot of confidence and authority on and off the ball. The Cameroonian should start in central defence.

A leader and a fantastic organiser of the backline, Van Dijk is Liverpool’s defensive lynchpin and one of the first names on Klopp’s team sheet.

Full of energy and always on the move, Robertson is a certain starter at left-back.

Fabinho brings calmness and balance to the Liverpool side. A top tackler, the Brazilian will look to keep things ticking from his position.

Henderson was poor against Sheffield United, so Klopp could fresh up things a bit in midfield by bringing in the veteran Milner.

Oxlade-Chamberlain hasn’t quite hit the heights since coming back from injury. He’ll be hoping to make a mark against Salzburg.

Salah has blown hot and cold this season. With his pace, skill and directness, the Egyptian could be a real danger for the Salzburg defenders.

Mane was quite poor against Sheffield United on Saturday after recovering from a minor injury. With games coming thick and fast, Klopp needs to keep his squad fresh and that could see him hand Origi a chance ahead of Mane on the left flank.

One of the most important players for the Reds, Firmino will lead the home side’s attack against the Austrian outfit. 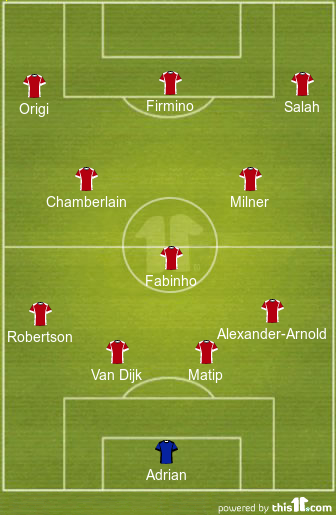