Liverpool would be aiming to keep their great form going when they face Porto in the first leg of the Champions League quarterfinals at Anfield. The Reds are coming into this tie after getting the better of Bayern Munich, while their opponents took care of Roma in the previous round.

After a testing February, when Jurgen Klopp’s men dropped quite a lot of points in the league, they have been in winning form over the past few weeks.

On paper, they are better than Porto and should complete the job over two legs. But this is Champions League, hence, nothing can be taken for granted.

With the Chelsea game sandwiched between both legs, Liverpool should be aiming to take a sizeable lead before the second leg.

Adam Lallana missed the previous game due to a muscular problem. It will be touch and go for him. Joe Gomez is fully fit to be included in the squad. Alex Oxlade-Chamberlain is still a few weeks away from full fitness.

Andy Robertson is suspended for the first leg of this tie.

He is their first-choice keeper and should be in goal.

The youngster struggled against Southampton but he is still a quality player who is expected to do well against Porto.

Even though Dejan Lovren and Joe Gomez are back to full fitness, Matip has done well in the past few weeks and deserves to stay in the team.

The Dutchman is just an irreplaceable cog in the team and is expected to start.

With Robertson suspended, the ever-reliable and versatile Milner could start at left-back.

He was slightly sloppy in the previous game, however, that should not be a reason to drop him down to the bench.

It looks like Henderson enjoyed playing the advanced midfield role against Southampton after coming on from the bench. Expect him to start this game.

Scored his first Liverpool goal on Friday that would give him a lot of confidence. Now, it is time to build on that and produce another good display.

The Egyptian broke his mini-drought against Southampton and would be aiming to start a scoring streak from this outing.

The Brazilian remains an important part of the jigsaw. His unselfishness as a striker bodes well for the team.

Despite not scoring in the last two games, Mane is one of the in-form players in Europe. He scored a hattrick against Porto last year and would be hoping to repeat that here. 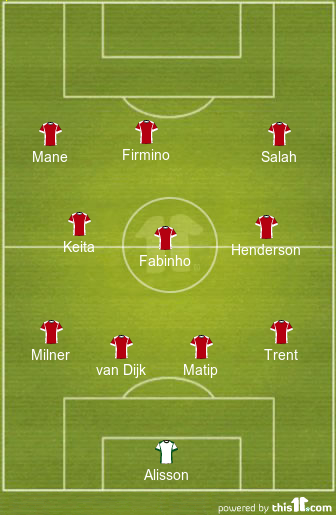